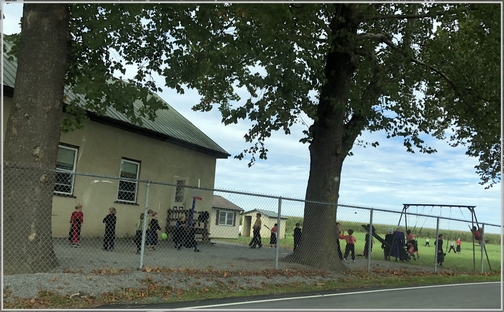 It’s always uplifting to pass an Amish school and see the children out for recess. It initially looks like a replica of Little House on the Prairie but it’s the real thing.

Message Summary: Our enemy’s mission is “to steal and kill and destroy”. But thankfully, Jesus came that we may have life, and have it abundantly”.

Listen to our message on your audio player.

In the mid-twentieth century mankind developed a type of weaponry unknown up until that period of history; weapons of mass destruction. Traditionally we have understood these weapons to be nuclear, chemical and biological. The distinction of these weapons is that they can kill people in mass and when used they rarely make a significant distinction between military and civilian.

However as technology increases we now have a more recently identified weapon of mass destruction known as an Electromagnetic Pulse (EMP). This weapon will bring the economy down very fast. Testifying before Congress, Peter Pry, executive director of the Task Force on National and Homeland Security, warned that a rogue state or terrorist could attack the United States with such a weapon that would kill 9 out of 10 Americans “through starvation, disease, and societal collapse”. You can be certain that more weapons of mass destruction are being developed. That’s the nature of sinful humanity.

When I consider that these types of weapons have been available my entire life it’s amazing that with all the evil hands on them we haven’t had a major earth-altering event. This is evidence to me of God’s sovereign overarching control. It won’t be over until God ordains it to be over!

Today let us consider four weapons of mass spiritual destruction that Satan has used from the very beginning. In fact these weapons can be seen in the Garden of Eden and all throughout Biblical and human history. It is essential that we identify these weapons and be on our guard.

Today’s Bible text is a reference to Satan. His mission is “to steal and kill and destroy”. But thankfully, as many of you know, we only quoted the first part of the verse. It goes on to say, “I (Jesus) came that we may have life, and have it abundantly”.

Daily prayer: Father, our hope plummets and our souls despair when we consider the first portion of John 10:10; “The thief comes to steal, kill and destroy”, for it describes our arch enemy whose sole mission is to take anything and everything that is of importance and value from us. But the gloom and despair is lifted as Jesus further tells His listeners, “but I have come to give life and give it more abundantly.” The thief takes, but You give, for You are the giver of life, giving freely and abundantly, not only in this life but in the life to come. Thank You for defeating the enemy of our soul that seeks to destroy with his arsenal of distraction, denial, downplay and distortion. You don’t tear down but build us up for You are our Redeemer and Deliverer, for which we are thankful. Amen.
Today’s Suggested Music and Supplemental Resources
“As We Speak”  Video  Greater Vision