“The Kind Word”
Note: This week we will consider how words can be a blessing and at times a great source of pain.

Message summary:  Thank God for the blessing of a kind word!

Listen to our message on your audio player.

Last Friday we visited with an employee who shared with us about her ongoing heartache concerning a young man’s suicide. He had been her grown son’s closest friend since kindergarten and took his own life in July. She keeps his memory alive by distributing small printed business size cards, with his photo, reminding people of the vital importance of extending random acts of kindness to others.

As we were talking I recalled an experience an employee from another company had shared with us several weeks ago when he was the beneficiary of a “random act of kindness”. His young son had a serious allergic reaction prompting a trip to the ER. He was finally discharged very late in the evening or early morning hour with a prescription that had to be filled. He went to CVS, the only 24 hour pharmacy in our area, and was shocked to hear the price of the medication. A man he had never met overheard him, saw his distress, and insisted on paying for it!

Well, I was telling this story to the lady and couldn’t recall the exact medication but I said the first thing that came to mind. I told her that the young boy needed an epidural and knew, when it came out of my mouth, that it didn’t sound quite right. That was followed by an awkward silence and a “you did it again” expression from Brooksyne. Then the woman responded with a chuckle in her voice, “I don’t think he was having a baby!” Anyway I meant to say “epipen”!

Many (likely all at one time or another) have experienced the first part of today’s Proverb. “An anxious heart weighs a man down”. What a powerful word picture of the burden of anxiety. Someone once defined anxiety as “a small trickle of fear that meanders through the mind, cutting a channel into which all other thoughts flow”.

An inner battle rages between trust and worry. Trust dispels worry. But much like the popup figures in an arcade shooting gallery, worry just keeps popping back up!

The anxieties of this life really do weigh one down. Sometimes it seems they really press on the heart and you can actually feel it (the KJV says it “maketh it stoop”). We are sure most of you know what we mean. And we wouldn’t be surprised if some of you reading this are experiencing an anxious heart as you read this. 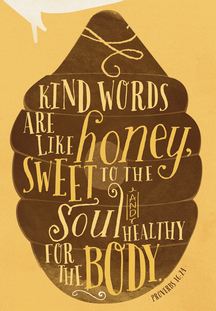 Thank God for the blessing of a kind word! We have so often been the recipient of such words. An earnest “I’m praying for you”, a caring “How’s your health?”, or a sincere “I really appreciate you.” Kind words like these really cheer the heart and, in each of the above examples, we can recall a specific instance that we continue to draw energy from. In the second daily text the word for “cheer” is literally derived from a Hebrew word meaning to “brighten up.”

We hope you all receive some kind words today. If you’re like us you like to surround yourself with people who are kind; that’s understandable and normal.

But we also challenge you to be a dispensary of kind words and deeds. Don’t base it on whether the recipient deserves it; do it as an exercise of obedience to God. Is there one of us who deserves God’s kindness?

As you fulfill the Biblical principle of sowing what you desire to reap, you may be surprised at the result. Or maybe you won’t, but You will be growing, stretching, and exercising the fifth fruit of the spirit listed in Galatians 5:22,23. After all, it’s easy to show kindness in response to kindness, but the real fruit of people’s character is seen when they respond in kindness to an unkind word or act.

Daily prayer: Father, the cares of this world often press in on us and weigh our hearts down. It’s not your desire that we carry this heavy load because You are the Burden Bearer. You use the difficult circumstances of our lives to bring glory to Yourself as You bring spiritual maturity into our relationship with You. There are many situations where we’ve been dealt with unjustly, with unkind words thrown our way. But there are many other times we’ve received kindness when we didn’t seek it. Help us to seek out ways in which we can speak kind words or extend ourselves in thoughtful and generous ways that will brighten one’s day. Let us be as rays of sunshine to one who might be overshadowed by clouds of discouragement today.  Amen.

Observation: A verse in Genesis rather graphically describes the severely strained relationship of Joseph and his older brothers who were extremely jealous of him. “They hated him and could not speak a kind word to him.” What a heartbreaking description of a very dysfunctional family! Can you imagine such seething resentment that would leave the brothers unable to merely say a kind word to their own brother?

Brooksyne’s Note: The life of Joseph is found in Genesis 37-50. Though I’ve known this story since childhood I never tire of re-reading it and being reminded of the importance of forgiveness and reconciliation. If anyone could be filled with worry and fear, certainly Joseph was a perfect candidate. But God had a plan for his life that could not be changed though he was abandoned, enslaved, framed, falsely imprisoned, and seemingly forgotten. God’s plan was not thwarted in the midst of all that would seem to indicate God had forgotten Joseph. But the scene was only setting up in slow motion for great drama and uncontrollable emotion as Joseph rose to second in command in his adopted country of Egypt. I’m so blessed in reading of Joseph’s perspective to the extremely difficult circumstances of his life over the previous twenty years when he said to his estranged brothers, “God sent me ahead of you to preserve for you a remnant on earth and to save your lives….so then, it was not you who sent me here, but God” (Gen. 45:7,8). We, like Joseph, need to recognize that God is working behind the scenes in every circumstance of our life – whether it is the workplace, family, the church, or any other uncomfortable matter that we are dealing with. If we want the spiritual maturity of Joseph we also must undergo the testings that brought him to such mature perspective. Ouch!

We want to thank all who have financially supported our ministry this past year (and some for many years!). We realize there are many fine ministries and causes requesting support at this time but if the Lord would lead you we surely need and appreciate the financial support from our readers and listeners. Like many ministries, we typically see a spike in giving at the end of the year for which we are most thankful.

Our ministry labor is comprised of approximately half our time to Daily Encouragement and the other half to our chaplaincy ministry to companies for which we receive compensation. Each of these ministries essentially is the same as a part-time job (20+ hours weekly) for each of us. Our goal for many years is that each would provide half of our ministry expenses and income.

If you would consider making a donation to our ministry see here for more information.

To donate directly online here. This will open to a page that designates the offering to: WEBER,STEPHEN CHAP, Specialized Chaplaincy Ministry ID: 700001-237376

Today’s Suggested Music and Supplemental Resources
“Show A Little Bit of Love and Kindness”  Video  The Collingsworth Family
“Try A Little Kindness”  Video  Glen Campbell  Brooksyne’s note: This is not a typical artist featured in our suggested music but the song just seems to fit.  Back in my teen years this song was very popular and I was a big fan of Glen Campbell (had to play his album when Daddy wasn’t home cause Glen Campbell was not country enough for my die- hard classic country dad – Porter Wagoner, Johnny Cash, Loretta Lynn, country fans will know the names.) There’s a good message in this song along with some nice imagery. 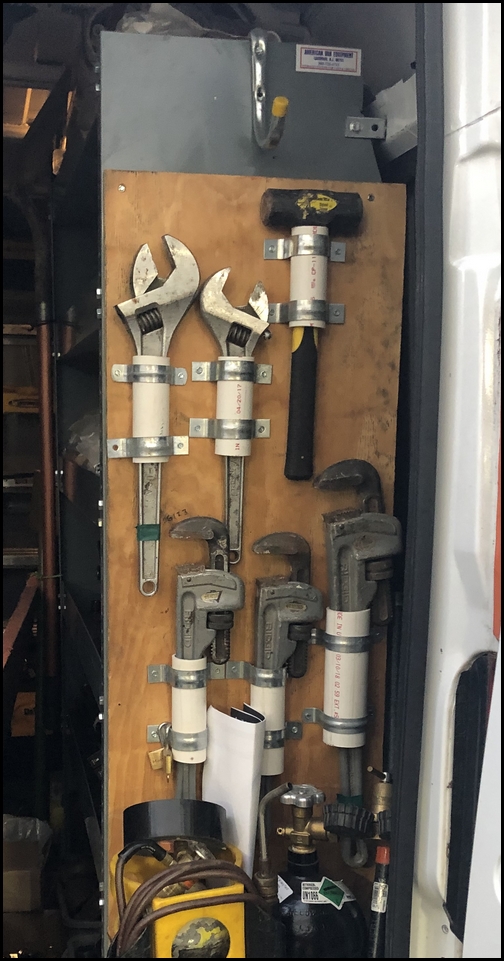 The tech who uses this JK Mechanical service truck stores his tools in good order using plastic pipe and clamps!