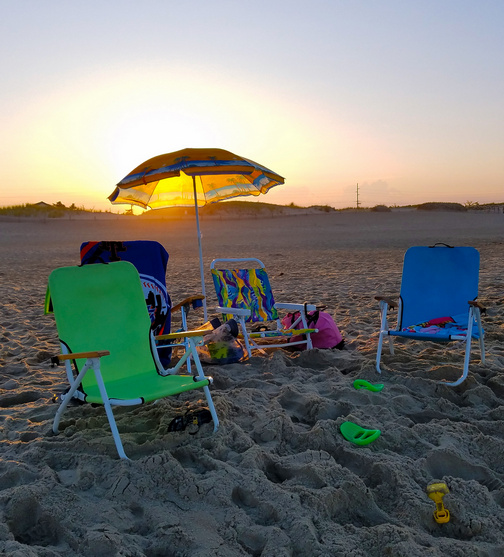 Our friend Joe and his family were at Kenwick Island on the Delaware shore a couple weekends ago and he showed us some of the photos he took. This photo stood out with the setting sun beaming right through the beach umbrella.

(Photo by Joe Ulicny)
“Changed Convictions”
Message summary: Our convictions are our deeply held beliefs. But is changing our convictions ever virtuous?

Listen to our message on your audio player.
“I was extremely zealous for the traditions of my fathers” (Galatians 1:14).

Earlier this summer a prominent writer and one time pastor announced that he had switched sides, abandoning his faith in Christ and joining the forces of the world. This made the news due to his prominence. This causes distress to some and it’s always sad to see this happen. But people have been abandoning the faith ever since Jesus walked on this earth (John 6:66) and the time of the apostles (2 Timothy 4:10).
That’s why there are so many calls to faithfulness in the Bible such as an early message from the apostolic church planters summed up as “strengthening the disciples and encouraging them to remain true to the faith” (Acts 14:22). Hebrews 10:23 states, “Let us hold fast the confession of our hope without wavering”.
In yesterday’s message we shared concerning convictions and the need to hold firmly to what we believe. Our convictions are our deeply held beliefs. But is changing our convictions ever virtuous?
Certainly! After all, when we are converted we change our convictions!
Saul, in his former way of life, had a deep conviction that he was serving God. In his testimony to the Galatian believers he speaks of his zeal, “For you have heard of my previous way of life in Judaism, how intensely I persecuted the church of God and tried to destroy it. I was advancing in Judaism beyond many Jews of my own age and was extremely zealous for the traditions of my fathers” (Galatians 1:13,14). At that time Saul surely was absolutely convinced he was on the right side.
But at his conversion to Christ on the Damascus Road Saul became a changed man. His convictions had a radical overhaul and even his name changed. We know him not as Saul but as the Apostle Paul. I find it interesting that a possible basis for this name change goes back to the Greek word “pauo”, a verb meaning to stop, restrain, quit, desist, come to an end. (We get the English word “pause” from this word.) The one who had been extremely zealous for the traditions of his fathers had a transformation in his convictions.

Yes, our deepest convictions can change both for good and bad. The late Dr. Bernard Nathanson was co-founder of the National Abortion and Reproductive Rights Action League, one of the most ardent pro-abortion organizations in the country. For many years he was both an abortionist and a national spokesman for the pro-abortion cause, convinced that he was on the right side.

However in a widely reported 1974 article in The New England Journal of Medicine, “Deeper into Abortion,” Dr. Nathanson described his growing moral and medical qualms about abortion. “I am deeply troubled by my own increasing certainty that I had in fact presided over 60,000 deaths.”
He eventually made an about face and shared of his change of viewpoint in his book “Aborting America”. He became an articulate voice for the pro-life cause and went on to produce a video titled “The Silent Scream”, which powerfully demonstrates the horror of an early abortion. He states, “the other side, those who advocate abortion, have never successfully challenged the validity of the film”. Dr. Nathanson could clearly explain what led to the change in his convictions!
More recently Abby Johnson, the main character behind the movie “Unplanned”, made a similar change. She was the youngest clinic director in the history of Planned Parenthood, then a life-changing experience turned her into a pro-life activist. She eventually came to see the utter evil of abortion during her time at Planned Parenthood in Bryan, Texas where 22,000 murders took place over her eight year involvement with that clinic.
People’s convictions can change, both from the wrong side to the right such as Paul, Dr Nathanson and Abby Johnson, but also from the right side to the wrong such as the man mentioned in our lead paragraph. I consider politicians who once expressed a very strong pro-life stand but who have changed to the opposite side primarily due to political expediency. The same is true for other moral issues such as the constitution of marriage. Many of us can remember not that long ago when many politicians expressed their “deep personal conviction” that marriage was between a man and a woman only to make an about face.
Here’s the point. What is the underlying basis for a change in a conviction? Is there a principled basis for this change? Are you holding true to your convictions? If you do at some point change your view on a deep personal conviction can you provide a sound, principled, Bible-based defense on why you changed?

Daily Prayer:  Father, we thank You for biblical convictions essential to our Christian faith, that are foundational to our personal convictions as we live out our spiritual walk. Like Abraham who was fully convinced that what God promised He was able to do. So indeed it was credited to Abraham as righteousness. Convictions have a definite impact on how one lives, what he does, says and where he goes. May the personal convictions we hold close to our hearts bring about a fruitful walk with You and enable us to live a life set apart for Christ in whose name we pray. Amen.

Here’s an interesting teaching on distinguishing convictions from opinions and preferences. 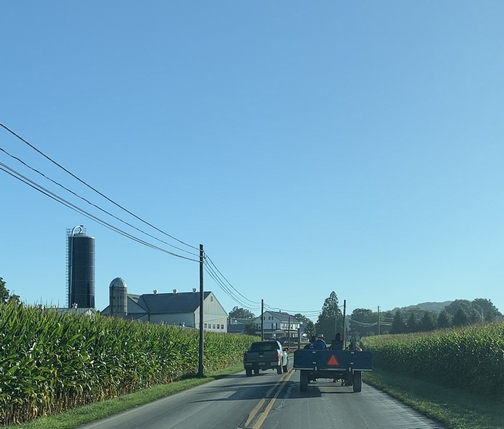 Yesterday morning this scene was on appropriately named Farmersville Road. 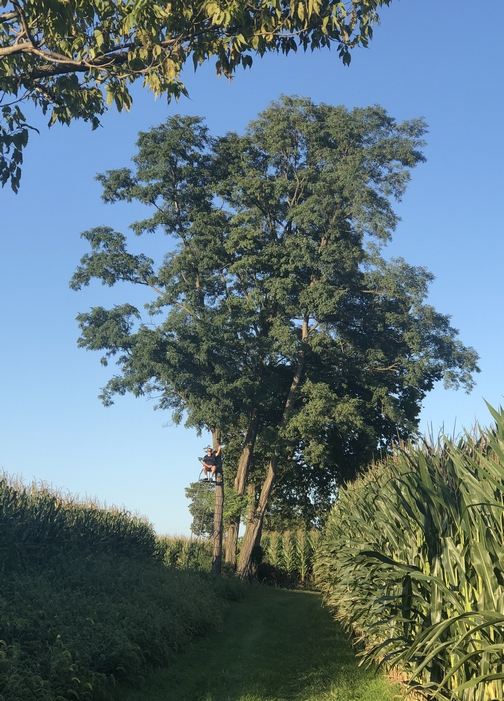 Late yesterday afternoon on our trail walk Stephen climbed up in a tree stand for a better view. 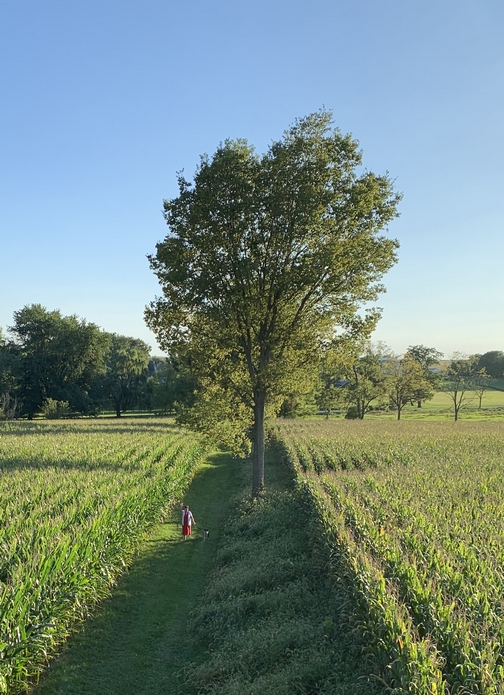 Brooksyne and Mollie down on the trail from the tree stand. 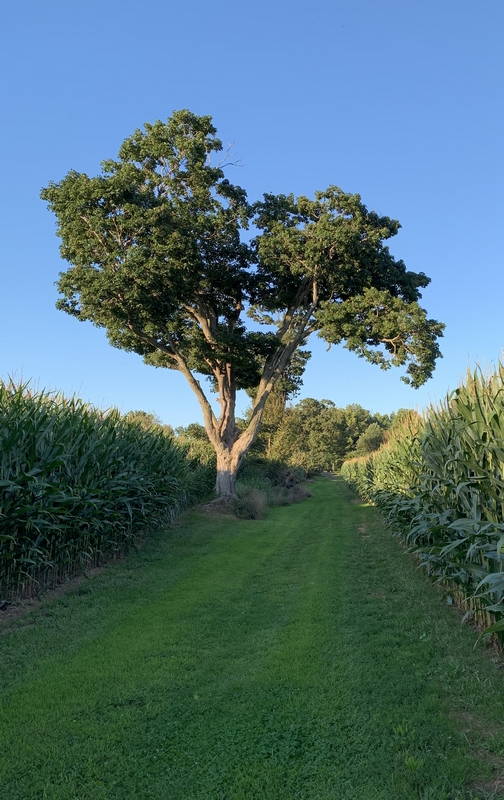 Heading down the long “corn canyon” leading back to our house we pass this persevering tree. 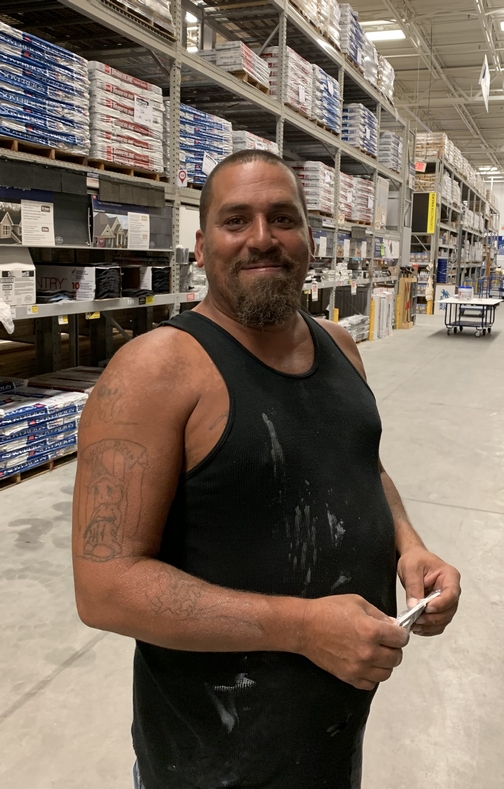 Yesterday I was in a Lowes store and a man came up to greet me. I haven’t seen Abel Lopez in probably 12 years when he came occasionally to the church we attended at that time. I was blessed to hear that he still reads our Daily Encouragements and I had the opportunity to remind him to follow Jesus and remain true to the faith.