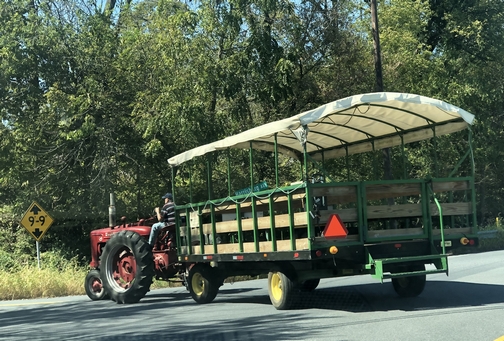 On Tuesday afternoon we came up behind this FarmAll tractor and deluxe hay wagon near our home here in Lancaster County. Looks like some are in for a stylish hay ride!
(Click to enlarge)
“Our Ram In The Thicket”
Message summary: Today we will consider a practical and spiritual application to the ram in the thicket.

“And Abraham lifted up his eyes and looked, and behold, behind him was a ram, caught in a thicket by his horns” (Genesis 22:13). “He who did not spare His own Son, but delivered Him over for us all, how will He not also with Him freely give us all things?” (Romans 8:32). 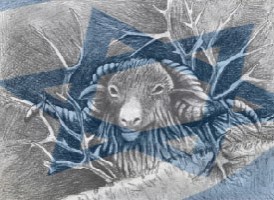 The phrase, “ram in the thicket” is an allusion to a tremendous event in the Old Testament recorded in Genesis 22. In one of the signature demonstrations of faith and obedience in the Bible Abraham was prepared to sacrifice his own son: “But just as he took the knife, the angel of the LORD called to him from heaven and said, ‘Abraham, Abraham!’ And he said, ‘Here am I.’ He said, ‘Do not lay your hand on the boy or do anything to him, for now I know that you fear God, seeing you have not withheld your son, your only son, from me'” (Genesis 22:11,12). Abraham passed the test.

“And Abraham lifted up his eyes and looked, and behold, behind him was a ram, caught in a thicket by his horns. And Abraham went and took the ram and offered it up as a burnt offering instead of his son.”

However, the account in Genesis goes on to proclaim a future provision to meet our greatest need: “So Abraham called the name of that place, “The LORD will provide”; as it is said to this day, “On the mount of the LORD it shall be provided” (Genesis 22:14). It is in this phrase, “The LORD will provide” that we find one of the Hebrew compound names for God many of us have heard and even perhaps sung about, “Jehovah Jireh”. This is the only time in Scripture that the title Jehovah Jireh appears.

We may consider this in regard to general provision regarding our everyday needs but foundationally the phrase is referring to something else. This was just moments after the great provision of the ram was provided as a substitute for Isaac. We would surely expect Abraham to say, “The Lord has provided” (past tense).

But let us consider carefully the tense that Abraham actually uses, “The Lord will provide”. He is referring to a future provision, Christ’s death on the cross for our sins. Traditional conservative scholarship holds that Genesis was among the Five Books Of Moses (The Pentateuch). Moses lived some 500 years after Abraham. At the time the oral record was placed in writing this statement was made “as it is said to this day, ‘On the mount of the LORD it shall be provided'”. That was some 1,500 years before Christ’s sacrifice on the cross for our sins.

Theologian RC Sproul observes, “It was on Mount Moriah, later named Mount Calvary, just outside of Jerusalem, where two thousand years after Abraham’s experience, our Savior on the night before His death went into the Garden of Gethsemane. With sweat drops of blood He pleaded with the Father to allow the cup to pass from Him. “Nevertheless” Jesus said, “Not what I will but what You will” (Mark 14:36). In that moment of the grand passion of Christ, the Father said no. The Father would not spare His Son.”

No, essentially God’s only begotten Son became our ram in the thicket. “He who did not spare His own Son, but delivered Him over for us all, how will He not also with Him freely give us all things?” (Romans 8:32). Hallelujah, what a Savior!

“Jesus What a Savior”  Video  Housefires