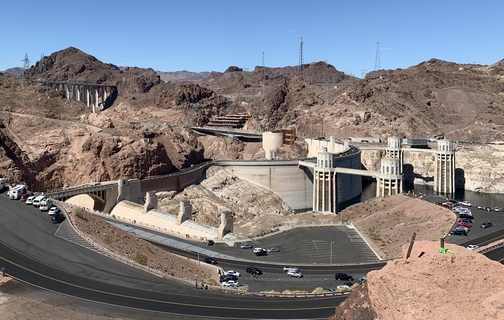 Hoover Dam from Overlook with the Mike O’Callaghan–Pat Tillman Memorial Bridge in the background.
“What Can The Righteous Do?”
Message summary: Stay faithful today! As a regular sub theme of this ministry declares at the very bottom of each footnote we are indeed, “living securely today anchored in God’s solid foundation.”

“When the foundations are being destroyed, what can the righteous do?” (Psalm 11:3).

During our trip out west we visited the Hoover Dam in southern Nevada/northern Arizona, one of the most massive civil engineering projects in America. Many years ago I read a book about building Hoover Dam and desired to see it up close. I had planned to take a tour but the lines were brutally long on a very hot day. (Several days later we toured Glen Canyon Dam which is similar.) I suppose if many of us were to think of a single notable dam in America it would be the Hoover Dam. 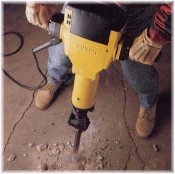 The summer after I finished high school before starting college I worked at a large pre-stressed/pre-fabricated concrete plant in Kansas. They made huge concrete components for bridges and parking lots. For a couple of weeks I had the most brutal job of my life; working a jackhammer.

Most of you know what a jackhammer is but I wonder how many of you have ever run one as a job? Even a ten minute stint should give you an idea of how hard the work is! I am thankful that after a couple of weeks I was assigned to the quality control team and comparatively speaking I stopped working!

They have a lot of security at the site and to take the dam tour requires passing through airport type security. I am sure they have means to detect guns and explosives (I sure hope so!). But I wonder what they would do if someone carried a jackhammer in. That’s something they probably wouldn’t typically be looking for! 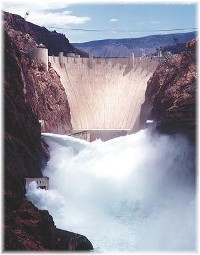 I am sure if I went to the base of the Hoover Dam with a jackhammer and began chipping away I would quickly be arrested. However, due to the massive size of the dam my individual chipping would have little effect, but persistently chipping away at the foundation of that great dam over time would eventually have an impact leading to a catastrophic failure.

I look at the state of America (and this message certainly applies to the godly remnant living in other countries as well), and it is very evident that the foundations are rapidly being destroyed. Each day it seems that a chunk falls from the base of our foundation. I consider the loud distinct sound of a jackhammer as I observe current events. (Note: We are not referring to the spiritual foundation which cannot be destroyed but rather the foundation of our temporal society.)

“When the foundations are being destroyed” The incessant chipping away at the foundational teachings of Christian faith and Biblical morality should be obvious to all who have any degree of spiritual and moral discernment. Merely consider the lies, violence, and perversions that abound. Yet it seems that for many people all that matters is the economy and their own personal pleasures. The observations of the historian Edward Gibbons comes to mind, whose summary of conditions at the fall of the Roman Empire seem so similar to conditions today.

Here in America a vile but growing minority is diligently seeking to abolish any evidence of Christian faith from the public square. A group called “Freedom From Religion Foundation” is leading this effort (actually the group would better be named “Freedom from Christianity.”) These and many other groups are relentless in their attempts to destroy the foundations.

“What can the righteous do?” That is the throbbing question for believers of every generation. Most of you reading this daily message have accepted the Lord Jesus Christ as your Savior and live under His authority. We are part of the righteous remnant that God has sustained through all ages. This remnant can be seen early in Genesis, when shortly after the Fall, “men began to call on the Name of the Lord” (Genesis 4:26) and all through the Bible, through church history and right up to the present.

What a great joy to be among those standing up for God in our own day! What can we do as we see the foundations being destroyed? If our primary stock and focus are in the foundation of this temporal life we will surely despair. Paul’s words come to mind, “If only for this life we have hope in Christ, we are to be pitied more than all men” (1 Corinthians 15:19).

But, if like Abraham, “we are looking forward to the city with foundations, whose architect and builder is God” (Hebrews 11:10) we will stand firm as the godly have done through all the ages.

Psalm 11 gives at least three contemplative answers to the question, “What can the righteous do?”

We must remember that no person, law, legislation, or imposed ideology can remove what God has revealed to our hearts and concealed within our spirits.

Stay faithful today! As a regular sub theme of this ministry declares at the very bottom of each footnote we are indeed, “living securely today anchored in God’s solid foundation.”

How firm a foundation, ye saints of the Lord,
Is laid for your faith in His excellent Word!
What more can He say, than to you He hath said,
To you who for refuge to Jesus have fled?

Daily prayer: Father, help us to be ever watchful and always prayerful as we see the foundations of our Christian faith attacked. Through the power of Your Spirit we want to take a firm position against the enemy and be strong in our faith. We stand with our Christian brothers and sisters all over the world who are going through the same kind of struggles, or worse, and especially pray for those who are paying a great price for their uncompromising stand. You assure us that after we suffer for a little while, You will restore, support, strengthen and sustain us as we stand firm on Your foundation. Amen. 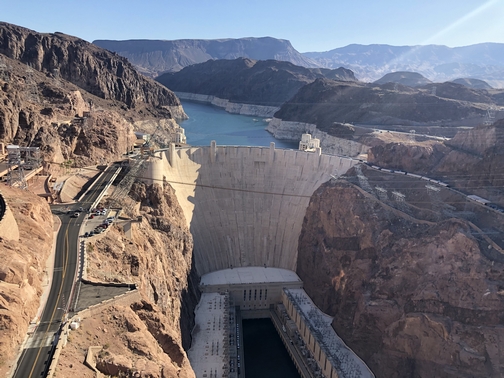 We began our visit with a walk over the Mike O’Callaghan–Pat Tillman Memorial Bridge 890 feet above the Colorado River. 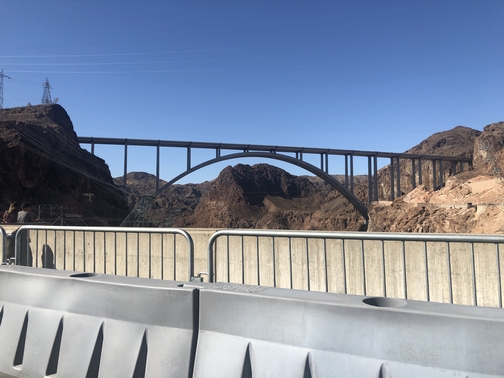 We walked across the dam which, prior to the construction of the bridge only nine years ago, also carried a heavily traveled highway from Las Vegas to Phoenix. 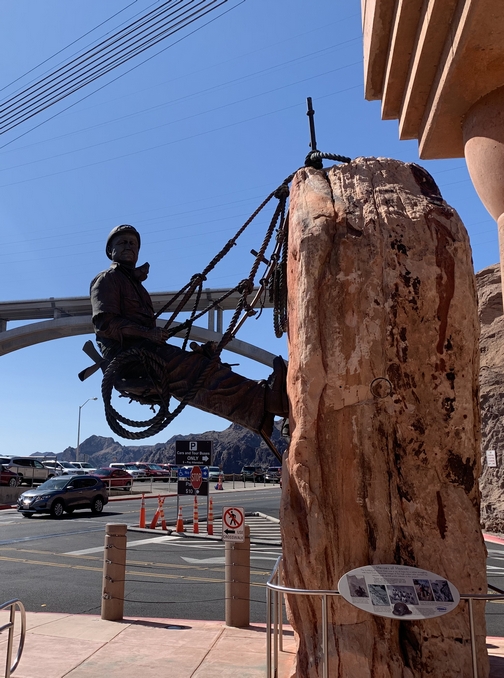 Next time you complain about your job try to imagine being a high scaler!
The High Scalers of Hoover Dam video 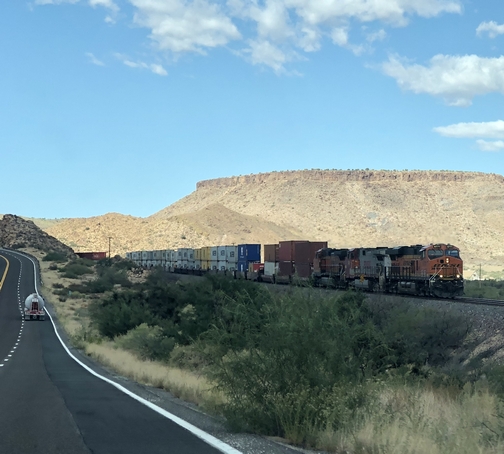 Leaving Hoover dam we headed to Flagstaff Arizona along Arizona route 66 with lots of trains to watch that chug, chugged right alongside us on the nearby tracks. 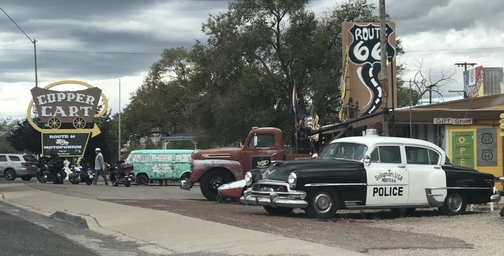 Seligman Arizona claims to be the birthplace of interest in historic route 66. 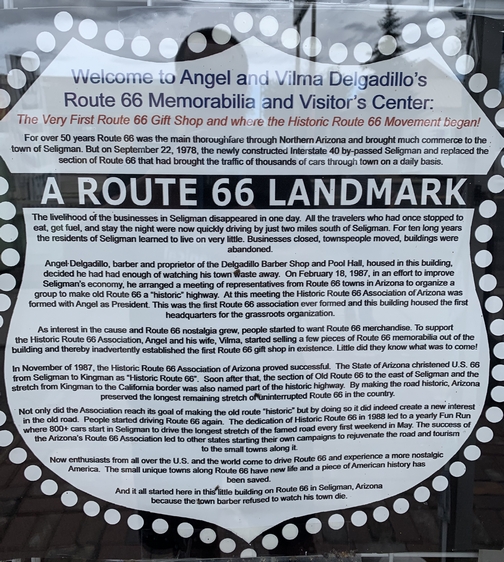 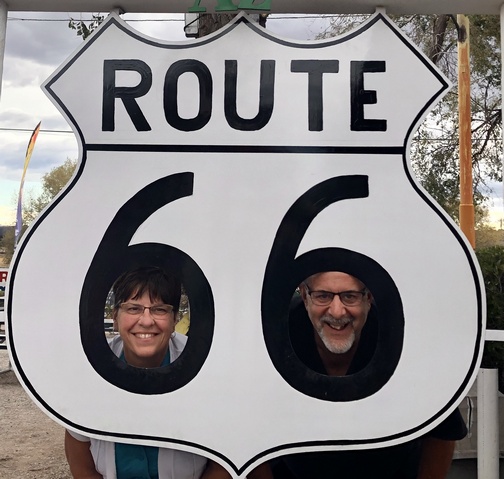 We had a lot of fun along Rt 66 and it was interesting how many Chinese people we ran into who were also interested in Rt 66! (Such as the one who took this photo)
Brooksyne grew up living practically next to Rt 66 in Tulsa, OK and it also ran through Springfield, MO where we met in college. However by that time it was just an old business route with Interstate 44 bypassing it.