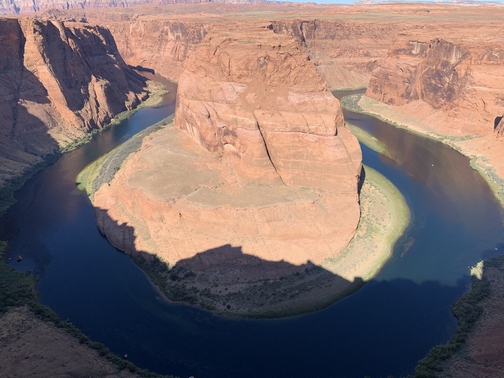 I read it’s best to take Horseshoe Bend photos in late morning to early afternoon. We visited in the early morning. Looking at the Bend from the east the canyon wall shades the Colorado River below!

Listen to this message on your audio player. “For since the creation of the world God’s invisible qualities—His eternal power and divine nature—have been clearly seen, being understood from what has been made, so that men are without excuse” (Romans 1:20). “Though you have not seen Him, you love Him; and even though you do not see Him now, you believe in Him and are filled with an inexpressible and glorious joy, for you are receiving the end result of your faith, the salvation of your souls” (1 Peter 1:8,9). 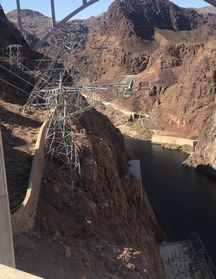 The tour takes you out to the top of the dam where you can look over the side if you want, either out over Lake Powell or the back side down to the power house. We then took a huge elevator down some 700 feet through the dam and then through a tunnel to the powerhouse with the generators. It was a well-spent 45 minutes with a very informative young guide who said it took a total of ten years to build the dam.

The dam can generate up to 1320 megawatts of power every hour of every day, enough to support 5 million homes, businesses and industries in seven states. Power from the nine humongous generators in the powerhouse is transmitted up to the surface of the canyon by just nine electric lines. I don’t know how thick these lines are but they carry a massive amount of power which you can’t see. (The photo to the left show the power lines from Hoover Dam).

About twenty-five years ago I was at a huge CBD warehouse book sale in Peabody Massachusetts (north of Boston). Many of you have heard of CBD (Christian Book Distributors) and perhaps ordered from them. (Now CBD also stands for something else). When we lived in New England several times a year they had a warehouse sale and people came from all over to attend for the bargains.

At one sale I saw a man sitting on the floor surrounded by a big pile of books. I started conversing with him and asked what he did for a living. I have always been interested in what people do which fits in well as a corporate chaplain!

This is his simple answer that I remember like it was yesterday: In his field of study there’s a focus on a power that is present but can’t be physically seen. Thus faith in an invisible God and His undeniable power is not so difficult for an electrical engineer to grasp!

The Apostle Paul speaks of God’s “eternal power” as one of God’s “invisible qualities”.  Paul uses a very interesting Greek word for “eternal” in this passage. The word aidios means “everduring” (forward and backward). This power is constant; there’s been no diminishment whatsoever from eternity past and there will be no diminishment in eternity future.

This is a reference to God’s everlasting power and divinity; and Paul’s argument is that invisible things may be “seen” by the mind. The things that are made, namely, all created objects, are the things which enable the mind to comprehend what no natural eye can see, that is, the power and divinity of God.

Notice the paradox in this verse: invisible qualities which are clearly seen! This has been true since the creation of the universe. The eternal power and divine nature of the Creator have been seen since that time (from Creation in our perspective but actually eternity past) and are now understood by the things that have been made, namely, the material creation. Man, reasoning upon the basis of the law of cause and effect, which law requires an adequate cause for every effect, is forced to the conclusion that such a tremendous effect as the universe, demands a Being of eternal power and of divine attributes. (Coffman)

But of course many do not accept this and the Scripture frankly teaches, “so that men are without excuse”.

According to the daily text and certainly in our observation God’s invisible qualities are “clearly seen, being understood from what has been made”. We pray that the Lord will open every reader’s heart and eyes to clearly see the glory of God; to believe, serve, and glorify Him today.

Immortal, invisible, God only wise,
In light inaccessible hid from our eyes,
Most blessed, most glorious, the Ancient of Days,
Almighty, victorious, Thy great Name we praise.
Be encouraged today,

Daily prayer: Father, everything in all Your creation cries out concerning Your invisible qualities—Your eternal power and divine nature. We are blessed beyond measure by Your handiwork, and Your invisible power that sustains and empowers us to walk in victory day after day. Your power is constant and there is no diminishment over time. On Your appointed day when we enter the portals of heaven, we will see so much more of Your creative power that is hidden from view on this side of eternity. Keep us faithful and respectful of Your almighty power that reigns in heaven and on earth. In the name of Jesus we pray. Amen. 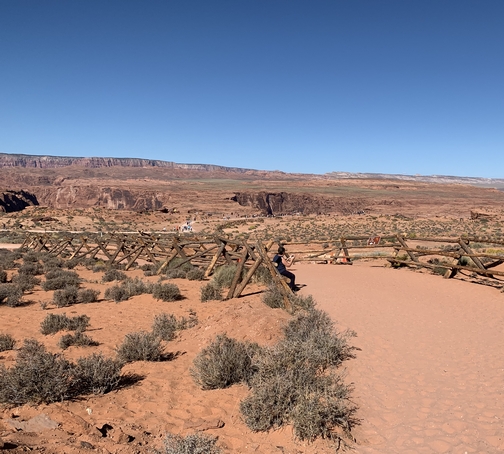 The visit to view Horseshoe Bend required a long, very hot walk over sand. This was the first of our long trail walk days during our trip. We’ll share about more during the next several days culminating in our final full day when we walked over 30,000 steps. 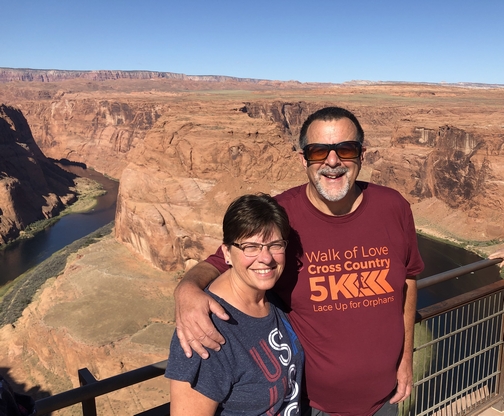 The Horseshoe Bend makes a nice spot for a photo, though the sun is so intense it’s hard to pull off the sunglasses. Looks like Brooksyne did just for this photo snap! 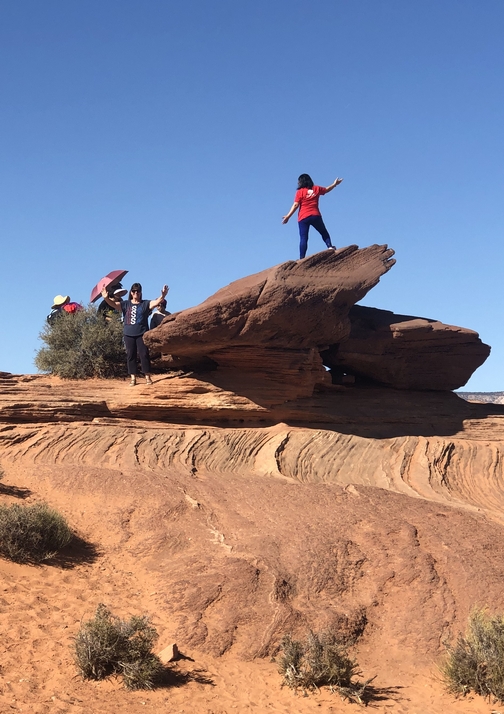 Brooksyne wanted to climb this track for a photo but another group had the same idea and lingered there for a long time, so she settled for the next level down! 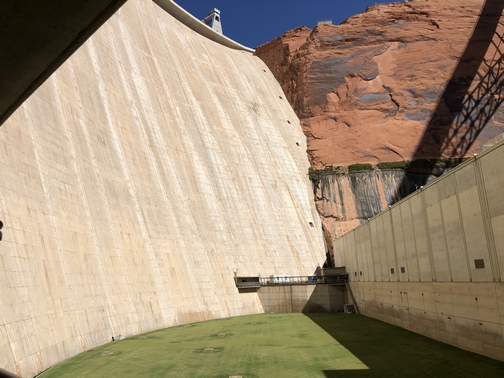 A view of Glen Canyon Dam from below during our tour. The back side of the dam is to the left and the powerhouse to the right. The green area is actually grass that is mowed which covers the huge pipes known as penstocks that carry water to the turbines below the powerhouse. 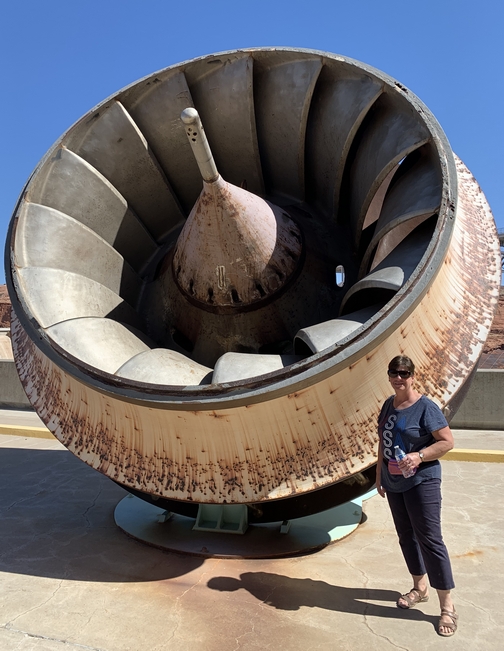 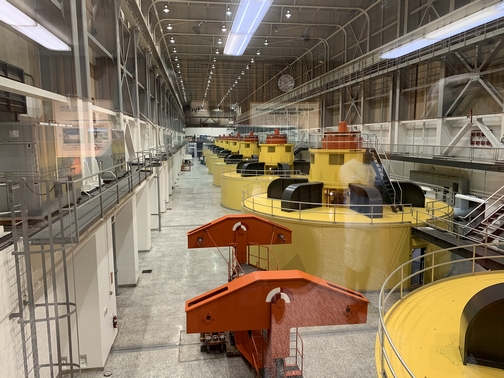 Inside the powerhouse at Glen Canyon Dam

The actual turbines were below this level and were not able to seen on this tour. These yellow units sit above them. I’m told the turbines on the Hoover Dam tour are visible.

“I Sing The Mighty Power Of God” Video  The Ball Brothers 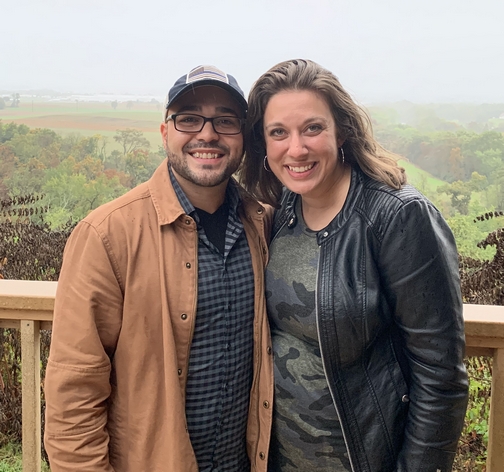 We attended an afternoon conference yesterday near Carlisle and ran into the Cullen family. Joey Cullen grew up in the church we served in New England in the nineties. He and his wife Lori lead a ministry in Philadelphia known as the Master’s Commission which disciples and prepares men and women for ministry. Lori is the daughter of Phil and Carol Menditto, friends from Bible College. They now have two children. 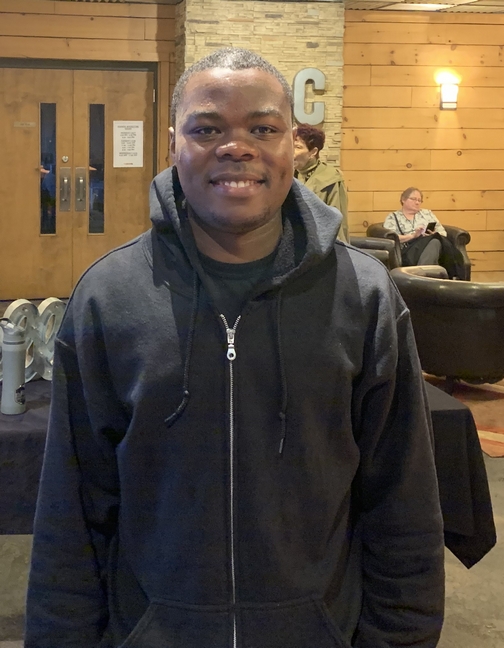 A graduate of the Master’s Commission from Kenya. We forgot this young man’s name but sure enjoyed meeting him and seeing his zeal for the Lord.