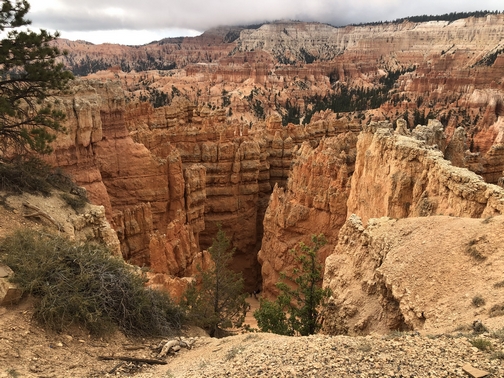 Bryce Canyon from Sunset Point looking down to Wall Street

“A Steady Walk”
Message summary: A great goal in this life will be to victoriously declare “I made it by the grace of God” in the life hereafter. Day by day it’s step by step on a steady walk!

“Blessed are all who fear the Lord, who walk in obedience to Him” (Psalm 128:1).
During our western trip we visited Bryce Canyon National Park in southern Utah. Interestingly, unlike the Grand Canyon, Bryce is not actually a canyon (see here). Bryce Canyon is known for its very interesting rock formations which you see from various scenic points in the park. We thought the best view was from Sunset Point, looking out over an area known as the amphitheater with many of the park’s most famous features; the hoodoos, which are tall, thin spires of rock protruding from the bottom. Another great vista was Inspiration Point.
As we stood on Sunset Point we saw people far below us walking on trails and, after some hesitation, we decided to hike the Navajo Loop Trail which descends into the hoodoos with an elevation drop of 500 feet. (That would be similar to a fifty story building.) The scenic but very wearying hike was one of the top highlights of our trip. As we went down, down, down we realized that there would be a point we would need to go up, up, up. And indeed there was, though the going up was a lot slower with breaks worked in as needed!

Our hike provides an illustration for today’s message. All through the Bible the life of faith is described as a walk. The first reference of this type is when “Enoch walked faithfully with God; then he was no more, because God took him away” (Genesis 5:24). In Genesis 17:1 God spoke to Abraham, “I am God Almighty; walk before Me, and be blameless.”

The Psalmist wrote, “Blessed are all who fear the Lord, who walk in obedience to Him” (Psalm 128:1). The prophets used this theme in passages such as Jeremiah 6:16, “This is what the LORD says: ‘Stand at the crossroads and look; ask for the ancient paths, ask where the good way is, and walk in it, and you will find rest for your souls.’ But you said, ‘We will not walk in it'”.“He has showed you, O man, what is good. And what does the LORD require of you? To act justly and to love mercy and to walk humbly with your God” (Micah 6:8).

This theme continues all through the Bible. Jesus said, “I am the light of the world. Whoever follows me will never walk in darkness, but will have the light of life” (John 8:12). It is used in the epistles such as Paul’s instruction, “So I say, walk by the Spirit, and you will not gratify the desires of the flesh” (Galatians 5:16).

Navajo Loop Trail had a very clearly marked path that navigated our way into and out of the canyon. In life we also have a clearly marked path, what the writer of Hebrews calls “the race marked out for us” (Hebrews 12:1). If we pay close attention to the Scriptures, the Holy Spirit’s guiding and the Apostle’s Doctrine we have a clearly marked path; that which guides us through this life and directs us toward our eternal destiny as we “walk in obedience to Him”.
The Navajo Loop Trail was hard in places; painful to the knees and other joints going down and a great workout for the cardio system going up. But we stayed on the trail and, although rather worn-out at the finish, we made it! That’s a great goal in this life so that we can also victoriously declare “We made it by the grace of God” in the life hereafter. Day by day it’s step by step on a steady walk!

Daily prayer:Heavenly Father, as I stand at the crossroads of decision where I am pulled in many directions, I direct my attention to the well-worn path marked out by faithful followers of God throughout the centuries – the faithful ones who remained true to Your ancient law whose hearts did not betray the One True God. With godly determination I earnestly desire to follow in the steps of the Master that leads me to find rest for my soul on earth and secures a heavenly home where my soul will no longer grow weary, be disheartened, or led astray by the enemy who plots deadly detours in the path laid out for the believer. By Your grace I move forward step by step in Jesus’ name I walk in obedience to You”. Amen.
Bryce Canyon National Park

This long hike included a portion through “Wall Street” which is a slot canyon. Slot canyons are an interesting feature of the American Southwest. I don’t recall ever hearing that term applied to any geographical feature here in the east although it’s similar to a glen such as Watkin’s Glen in New York or Ricketts Glen here in Pennsylvania.

A slot canyon is defined as “a long, narrow, deep and tortuous channel or drainage way with sheer rock walls that are typically eroded into either sandstone or other sedimentary rock. A slot canyon has depth-to-width ratios that typically exceed 10:1 over most of its length and can approach 100:1.” 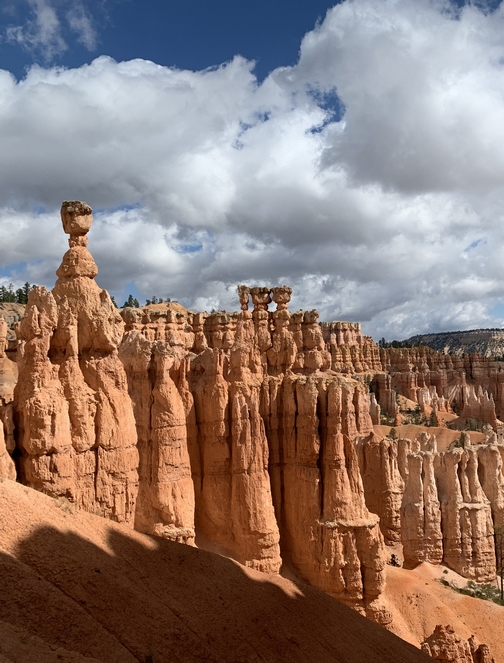 From the trail the view of the hoodoos is different than looking down on them. To the left is probably the most famous hoodoo, Thors Hammer. 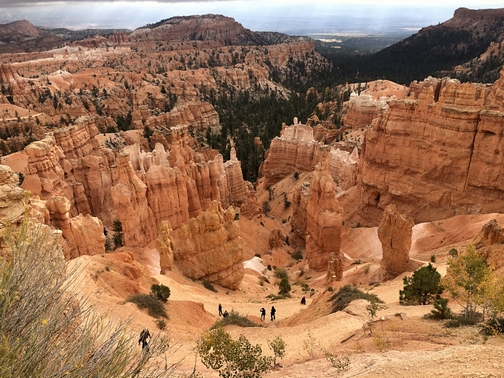 A view from the top of the hike after we finished our steep climb. We looked down at those still climbing and said, “Wow, we made it!”
(Click on photo to enlarge) 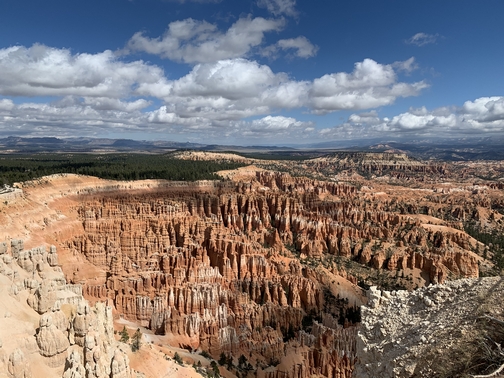 Bryce Canyon from Inspiration Point
(Click on photo to enlarge) 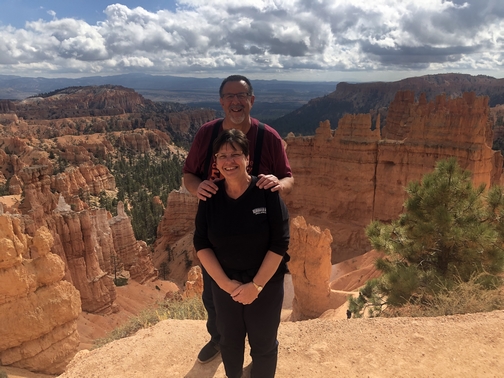 On our trip we counted our blessings that we’re mobile, have good vision, and still have energy when needed that we often don’t feel on a day to day basis.
Today’s Suggested Music and Supplemental Resources
“Step By Step”Video  Rich Mullins

“Trust And Obey”Video  “When we walk with the Lord” 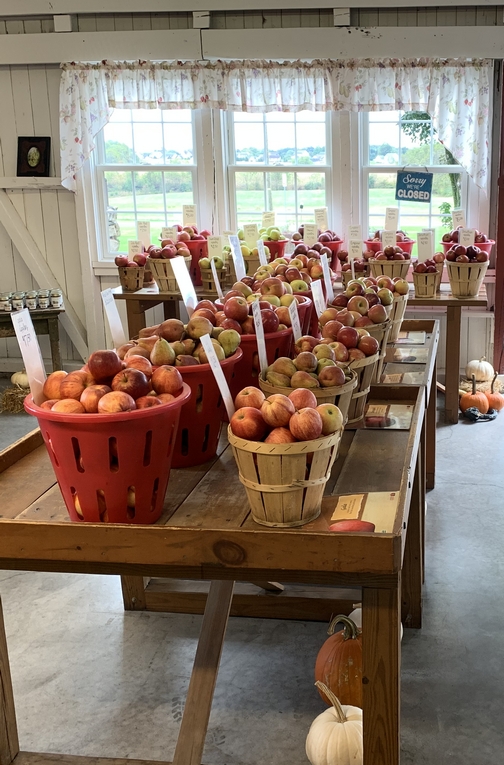 Yesterday morning we stopped by the Seyfert Orchards farm stand in Lebanon County to purchase apples. Apples are a great sign of Autumn. From strawberries and cherries in the spring to apples and pumpkins in the autumn, and all the wonderful fruit in between, we can mark the seasons by the availability of particular fruit during certain months of each year.