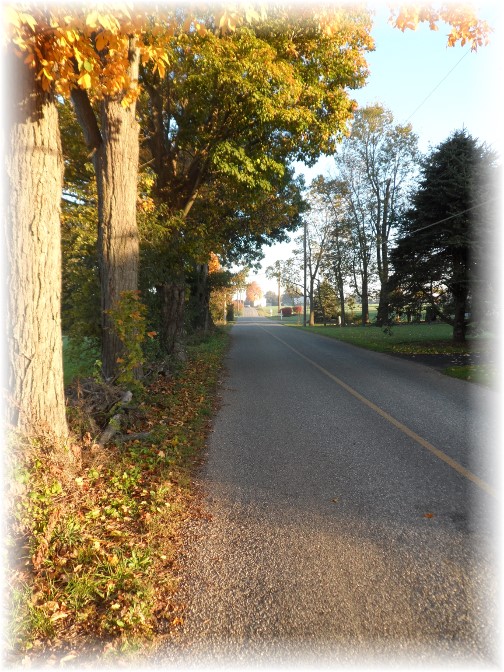 A view looking up Kraybill Church Road from our driveway.
“God Has No Rival!”
Message summary: God has no rival and no equal. Now and forever, He reigns!

Listen to this message on your audio player.
“For this reason also, God highly exalted Him, and bestowed on Him the name which is above every name, so that at the name of Jesus every knee will bow, of those who are in heaven and on earth and under the earth, and that every tongue will confess that Jesus Christ is Lord, to the glory of God the Father” (Philippians 2:9-11). “Now to the King eternal, immortal, invisible, the only God, be honor and glory forever and ever. Amen” (1 Timothy 1:17).

A rivalry is defined as “the state of two people or groups engaging in a lasting competitive relationship. Rivalry is the ‘against each other’ spirit between two competing sides. The relationship itself may also be called a rivalry, and each participant or side a rival to the other.

We consider great rivalries in sports. Perhaps the longest lasting is the New York Yankees and Boston Red Sox. In the corporate world we consider the longstanding rivalry between Coke and Pepsi.
The Bible speaks of rivalries as well; usually in a family sense such as the bitter rivalry between twin brothers Jacob and Esau. At the time of Christ’s trial Herod and Pilate were rivals. Even among the Twelve there is some evidence of rivalry such as the peculiar seating request by James and John. (Mark 10:35-40). “When the ten heard about this, they became indignant with James and John” (Mark 10:41).

Paul alludes to a type of rivalry that exists among ministries and the motivation for preaching: “It is true that some preach Christ out of envy and rivalry, but others out of goodwill. The latter do so out of love, knowing that I am put here for the defense of the gospel” (Philippians 1:15,16). Sad to say these types of questionable motivations and ministry rivalries still exist today.

Many of us are blessed by the powerful worship song “What A Beautiful Name” which we sang in our church this last Lord’s Day. It comes to a majestic crescendo with this verse:

I am especially blessed by the line, “You have no rival, You have no equal”.

Satan is God’s ancient adversary but he is not God’s rival. No doubt, he would like to reckon himself as God’s rival and we may mistakenly see him that way.
However a rivalry is a contest between two equals. We wouldn’t speak of the New York Yankees and the little league team I played on in Belton, Missouri as being rivals.
Satan is a part of the created order, a fallen angel. God is the Creator of the universe. He is “God Most High, Creator of heaven and earth” (Genesis 14:19).

We serve the God whose Name is above every name, the King who is “eternal, immortal, invisible”.
Today lift your eyes and direct your heart:

Daily prayer: You didn’t want heaven without us, so Jesus, You brought heaven down. Through Your sacrificial death You silenced the boast of sin and the grave. Though my sin was great, Your love was greater; and nothing can separate us now, for we are engraved on the palm of your hand. What a beautiful name it is, the name of Jesus, that at Your name every knee will bow and every tongue confess that You are Lord to the glory of God the Father. Amen.
“What a Beautiful Name” adapted in prayer.