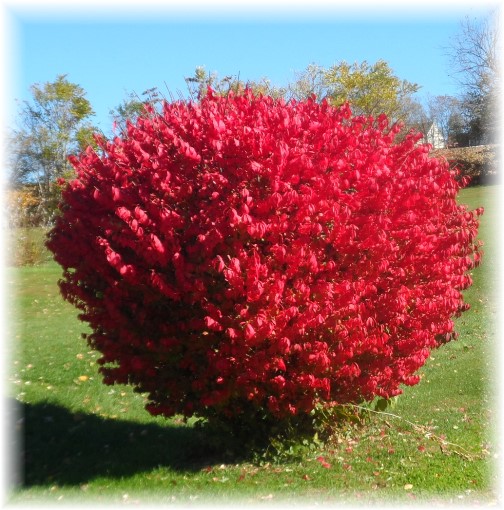 The burning bushes are bright crimson all over our area.
“A Lesson From The Burning Bush”
Message summary: A message for those fearful of God’s call.

Listen to this message on your audio player.
“The angel of the Lord appeared to him (Moses) in a blazing fire from the midst of a bush; and he looked, and behold, the bush was burning with fire, yet the bush was not consumed” (Exodus 3:2). “Now go, for I am sending you to Pharaoh. You will lead my people, the Israelites, out of Egypt. ‘But who am I to appear before Pharaoh?’ Moses asked God. ‘How can you expect me to lead the Israelites out of Egypt?’ Then God told him, ‘I will be with you. And this will serve as proof that I have sent you'” (Exodus 3:10-12).
We enjoy this relatively brief season of bright fall foliage. We still have plenty of autumn beauty in our area but it’s diminishing day by day and likely the next time we get a cold, windy rain most of the leaves will drop leaving us with comparatively bland scenery, that is, until the trees are blanketed with snow.
Among the brightest sights we see now is the burning bush, which is in fiery abundance all through our region. Through most of the growing season it’s a rather ordinary looking green shrub, but in the autumn it turns into a crimson ball of color. It’s scientific name is Euonymus alatus, but the common name “burning bush” comes from the bright red fall color.
Perhaps this name comes from the burning bush written about in the Bible!

The burning bush is described by the Book of Exodus (3:1ff) as being located on Mount Horeb. The bush was on fire, but was not consumed by the flames, hence the name. The burning bush is the location where Moses was appointed by God to lead the Israelites out of Egypt and into Canaan.

This story is recorded in Exodus 3 & 4. It reveals the call of a reluctant Moses to be a deliverer for God’s people to be brought out of Egypt. It’s a long exchange but today we will seek to glean a truth and application from God’s conversation with Moses assuring him that He could use him, fears, weaknesses and all.

The angel of the Lord appeared to him in flames of fire in a burning bush and gave Moses this commission: “I am sending you to bring my people the Israelites out of Egypt” (3:10).
Initially Moses responded to God’s call with fear, hesitation and low confidence. “But who am I to appear before Pharaoh?’ Moses asked God. ‘How can you expect me to lead the Israelites out of Egypt?'”.

Fear can absolutely paralyze one’s giftings, vision, and courage to accomplish anything for the kingdom of God. Is there any wonder that Moses took to the wilderness for 40 years content to tend sheep and live an ordinary shepherd’s life?

But God had bigger plans and told Moses about it on the far side of the desert at the mountain of God.

It’s one thing to tend needy sheep, quite another to tend needy people. (All pastors would agree with that statement.) So Moses naturally spoke back to God, “Who am I, that I should go to Pharaoh and bring the Israelites out of Egypt?”

And therein lies the question most all whom God calls to Christian service must settle once for all. There was much conversation between God and His servant, Moses, to ascertain that God was truly calling him to this gigantic task. Moses kept looking to his own abilities or lack thereof and felt he had nothing to offer.

But God was not looking upon Moses’ abilities – He would provide that. Instead He looked for his availability and willingness to say, “Yes” to God’s calling. After all, God wasn’t sending him to Egypt to represent Moses. Instead he was being sent to represent “the God of your fathers, the God of Abraham, Isaac, and Jacob.”  “Tell them, ‘I AM has sent me to you.'”

The same powerful God of our ancestors will “be used from generation to generation” (3:15) to equip us with extraordinary ability when we’re inclined to question Him or decline His calling because we’re badly frightened. God gives us courage to conquer that which would otherwise hinder us from experiencing God’s greatest blessings in our lives and the blessings He has for others who benefit from our obedience.

Don’t run and hide, make excuses, delay, or tremble in fear. Let us trust God that He will equip us when He calls us to make a difference in His kingdom. Are you listening to His voice today? What is your answer?

Daily prayer: Father, those whom You call You also equip to do that which we cannot do in ourselves. You assured a frightened Moses with these words, “I will be with you” and You assure our spirits with the very same message, “I will be with you” no matter how hard the test and no matter what You ask us to do. When we obey and trust You we’re assured the victory just like Abraham, Moses, Job, Daniel and all the other common, ordinary people of the Bible who became heroes in our eyes. We walk in victory because You are the great I AM and You are with us enabling us to do that which You have called us to do. In the name of Jesus we pray. Amen.

Brief background: Moses had an adventuresome life had lots of twists and turns. It started in his infancy when his mother hid him from the Egyptians who were slaying all male Hebrew babies. He was found by the princess of Egypt who adopted him and raised as him as Egyptian royalty. Another twist was that his own mother nursed him through his younger years and likely instilled in him his identity as a descendant of Abraham.

Although Moses had a privileged upbringing in the royal palace with all the wealth, prestige and power anyone could want, especially an Israelite, he was born a Jew and would remain loyal to the Jewish people. And therein lies the opportunity for God to use Moses to free the Israelites from 400 years of captivity. In his fortieth year, yet another major turn came when Moses who had lived and eaten at Pharaoh’s table was now being hunted down by him for killing an Egyptian. He left Egypt fleeing for his life since “WANTED” posters were hung in every building and posted throughout the land. Exodus 2:14 describes Moses as “badly frightened”. He then spent another 40 years in the desert till God’s call at the burning bush.

Here are some burning bush photos we have taken through the years; 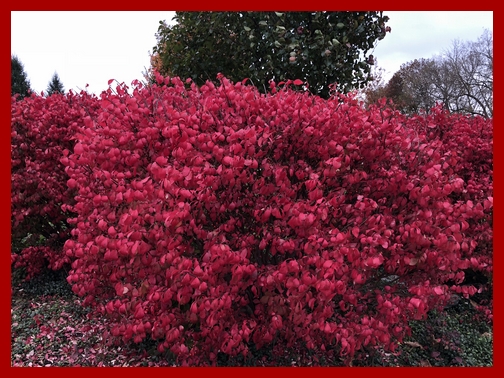 A cluster of burning bushes in full brilliance 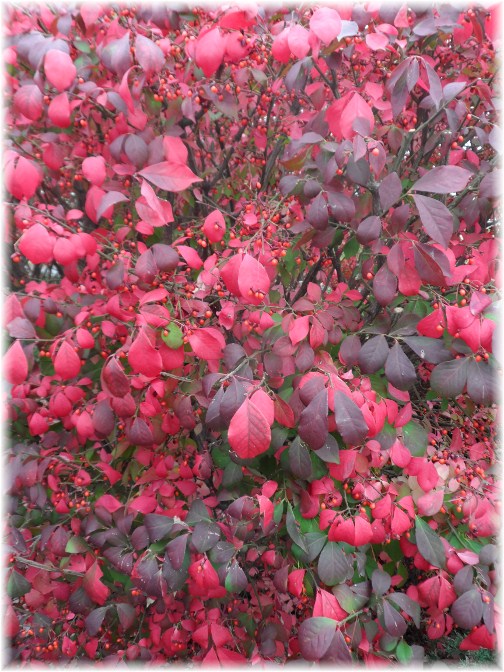 Here’s a close-up of a burning bush. 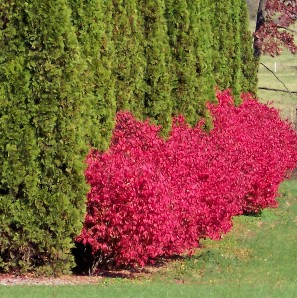 Nature’s Christmas colors!
Brooksyne took this photo of the burning bushes with a row of arborvitae behind it.
Today’s Suggested Music and Supplemental Resources
“Fear Is A Liar”  Video  Zach Williams

“Blessings”  Video
Last Friday we shared a message titled “When I Am Afraid” about how terrified our border collie Mollie becomes during storms. Several suggested thunder jackets including Nelson, a long time friend, who also draws a spiritual analogy!
“Sounds like Mollie needs a thunder vest/thunder jacket to calm her. Could be your solution! There certainly must be a spiritual analogy to thunder vests for people in the face of life’s storms – God as our rock, His arms around us, resting in His shadow.”
(We tried the thunder jacket but she was terrified of it, ran away with it on and we never found it. Perhaps we’ll give it another try since that was about five or six years ago.)
Sue writes concerning our Monday’s message “Not A Waste Of Time”:
I was moved very much by this message entitled “A Waste of Time.” For nearly 30 years, I served the developmentally disabled population first as a direct care worker and finally as a case manager/advocate for many years before my retirement in 2017. It was never a high paying job and there were so many instances where I was frustrated and often despondent that I struggled to make ends meet. But I never gave it up because it felt like a calling rather than a job. I recall in my early years in the field being asked by others why I was settling for such a low paying career when I had a Master’s Degree. I remember feeling a little surprised at this comment because what these people were saying was that I was, in essence, wasting my time helping people with disabilities. I learned so much about life working with the “least of these” and the years I spent doing so were both humbling and uplifting. Thank you both for this message.