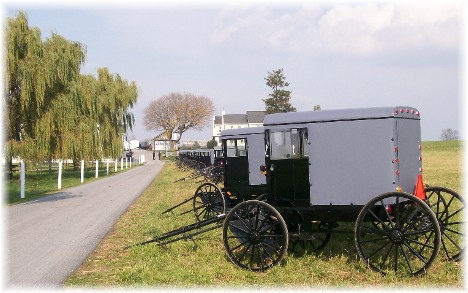 Buggies parked along a long lane at an Amish wedding here in Lancaster County. November is a popular month for Amish weddings normally on Tuesday or Thursday.

“Was There An Odor?”
Message summary: Today let us consider one of the foulest odors of all, death.

Listen  to this message on your audio player.
“But, Lord, by this time there is a bad odor, for he has been there four days” (John 11:39) “The dead man came out, his hands and feet wrapped with strips of linen, and a cloth around his face. Jesus said to them, ‘Take off the grave clothes and let him go'” (John 11:44).
Out here in the country we are subject to a variety of odors, some pleasant some not so much. We benefit from fresh country air and the fragrance after the rain. Sometimes you can smell the crops, especially alfalfa. We are especially blessed when, depending on wind direction and production, we get a wonderful chocolate aroma from Cargill Cocoa & Chocolate Plant in Mount Joy. At times we may even get a whiff of chocolate from the M&M Mars Plant in Elizabethtown.
However you take the bad with the good and several times a year we get an application of organic fertilizer (AKA manure) on the neighboring farm fields as well as the periodic, always distinct, odor of a skunk (usually dead).
But the last several weeks we have endured a newer odor, at least in our area. Several are now growing marijuana, also known as hemp. It’s not as bad as manure but we sure don’t find it pleasant.
Today let us consider one of the foulest odors of all, death.

Today’s text is from the account of the resurrection of Lazarus. This is surely one of our Lord’s greatest miracles and particularly set in motion the great opposition that led to His arrest, trial and crucifixion (see 11:46ff). This is the occasion when we are specifically told “Jesus wept”.
How utterly disappointed His sisters Mary and Martha were when Jesus did not make it in time to heal their brother. But Jesus had another miracle in store, a resurrection!

Prior to the miracle Mary had responded to Christ’s command to move the stone with the well reasoned observation, “But, Lord, by this time there is a bad odor, for he has been there four days” (v.39). Notice Jesus does not dispute this.  Instead he calls out in a loud voice, “Lazarus come forth”. And that’s just what Lazarus did!

Think and ponder with me for a moment. Surely a great miracle had occurred as Lazarus marched out of that tomb. But do you suppose there was an odor? Now surely Jesus could have had him come out in a tuxedo if He willed, but the text plainly says he was still wrapped in the linen grave clothes and Jesus commanded those who witnessed the miracle to “take off the grave clothes and let him go”.

I wonder what kind of job this was? Sure, they were rejoicing, but did they say to one another, “You unwrap him”. Was there an odor? Was Lazarus, graveclothes and all, completely sanitized during the miracle? Did he come out smelling like “Old Spice”? Of course we don’t know but I really think not! I would imagine that the folks had a pretty nasty little job in getting those clothes removed.

The Bible says, prior to conversion, we are all “dead in our transgressions and sins” (Ephesians 2:1). To those with a nose to smell

spiritually I’m sure there is an odor! I’m thankful for those who, through the years, have removed the old, stinky graveclothes of the newly redeemed (and still do so). I’m thankful for the privilege of unwrapping graveclothes from others who have been resurrected spiritually. Sure, there is an odor and it’s hard at times, but underneath a new person is being formed and growing in the image of Jesus Christ.
Jesus loved Lazarus and he loves us in spite of the odor. May He also help us to love one another today!
Be encouraged and today,
Stephen & Brooksyne Weber

Daily prayer: Father, we marvel in the resurrected healing of the dead man, Lazarus. When his sisters and friends had given up hope all along You had a plan to defy death and raise Larazus to newness of life. It’s true in our lives as well, since You have made it possible for us to put to death the old nature and You have raised to life the new person we are as we are born again. Thank You for forgiving us our sins and giving us life eternal through Your death and Your resurrected life. Amen.
Tomorrow we will consider another passage dealing with odor. “For we are to God the aroma of Christ among those who are being saved and those who are perishing. To the one we are the smell of death; to the other, the fragrance of life” (2 Corinthians 2:15,16).
Today’s Suggested Music and Supplemental Resources
“Four Days Late”  Video  Karen Peck