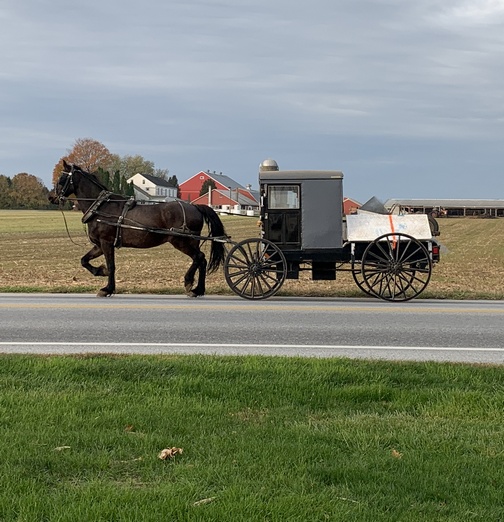 Early yesterday morning we saw this horse and buggy pickup on Strasburg Pike.
Click to enlarge

“An Aroma Of Death”
Message summary: Today, we urge you to spread everywhere the fragrance of the knowledge of Jesus. May this fragrance be pleasing to God as it releases the fragrance of spiritual truth to those around you. For some it is an aroma of life. But just remember to some it will be an aroma of death.

Listen  to this message on your audio player.

“But thanks be to God, who always leads us in triumph in Christ, and manifests through us the sweet aroma of the knowledge of Him in every place. For we are a fragrance of Christ to God among those who are being saved and among those who are perishing; to the one an aroma from death to death, to the other an aroma from life to life. And who is adequate for these things?” (2 Corinthians 2:14-16). 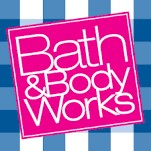 One of Brooksyne’s favorite stores is the Bath and Body Works, a store devoted to pleasant fragrances in soaps, lotions, candles and other items. I will usually go in with her for a few minutes till I lose interest and leave to find somewhere else to putter around or head back to the van for a nap! We have two of their stores here in Lancaster County but we often stop by one when we travel, which always seems to please her.

In addition to personal fragrances we have home, business and automotive air fresheners. Making our little environment around us smell good is big business!

She has one fragrance from Bath and Body Works that I especially enjoy called “Energy” which is labeled as aromatherapy and I reckon anything with “therapy” in it must be good for you! Whenever she puts the lotion on her hands I inevitably say, “Wow, that sure smells good”.
However not all enjoy or can even tolerate these fragrances as it may trigger their allergies or other respiratory issues. What some may experience as a pleasant aroma others find distressing. We have seen places that have “fragrance free spaces” where others are asked not to wear fragrances, which seems reasonable (unlike the “safe spaces” many woke colleges now have to coddle the easily offended, triggered youngsters).

Yesterday’s message “Was There An Odor?” considered the odor of death based upon a statement by Mary prior to the resurrection of Lazarus. “But, Lord, by this time there is a bad odor, for he has been there four days” (John 11:39).

Through the years we have developed several messages based on today’s text, focusing on how we are an aroma of Christ. But today we would like to consider an aspect from today’s passage that speaks of followers of Christ as being “an aroma of death”.

Christ’s followers are called not only to be “the light of the world” (Matthew 5:14) but we are also called to spread a fragrance. Paul uses a rather unusual metaphor in our daily text to describe this aspect of ministry, God “manifests through us the sweet aroma of the knowledge of Him in every place.”

“But thanks be to God, who always leads us in triumph in Christ.” Fragrance, in the form of incense, was common at the Roman triumphal parade. In Paul’s mind, this fragrance is like the knowledge of God, which people could smell as the triumphal parade comes by.

God has ordained that His people spread the fragrance of the knowledge of Him everywhere. The Greek word for aroma is “osme” and is the same word used when Mary washed our Lord’s feet with expensive perfume and the pleasant fragrance filled the house.

This “aroma of Christ” is detectable to both the saved and the unsaved. However their reactions are entirely different. To those “who are being saved” it is “the aroma from life to life”.

But to “those who are perishing” it is the “aroma from death to death”. David Guzek observes, “The scent of incense burnt to the gods in a Roman triumphal parade smelled wonderful to a Roman. The same aroma was a bad smell to a captive prisoner of war in the parade, who would soon be executed or sold into slavery.”

This contrast is similar to a theme found in John 3 regarding reactions to light. Some love spiritual light while others hate it and seek to flee from it.

Paul’s closing question in this passage is; “And who is equal for these things?” He was aware of the awesome responsibilities that this placed upon himself and other believers. The same is true for us today and we urge you to spread everywhere the aroma of the knowledge of Jesus. May this be pleasing to God as it releases the aroma of spiritual truth to those around you! For some it is an aroma of life. But just remember to some it will be an aroma of death.

Daily prayer: Father, I am thankful for the sense of smell. Depending on what I am smelling it can bring about a pleasant response where I linger taking in more and more of the pleasing scent. Today, I pray that the spiritual fruit from my life would emit such an aroma. I want to offer the sweet smelling sacrifice of a life fully surrendered to You. I pray that those whom I see today would find my words and actions to be a very uplifting part of their day. May I bring encouragement through pleasant conversation and by taking a personal interest in others. Keep my mind and words from sinking in the cesspool of lies, jealousy, gossip, immorality and hatred. Instead I want to spread the aroma of the living Christ that others might seek Him and know Him. In Jesus’ name I pray. Amen.

On yesterday’s post we shared a photo of a long line of buggies parked along a driveway at an Amish wedding. Here’s a scene from our travels yesterday of parking for an Amish wedding on Stumptown Road (one of our favorite Lancaster County road names). We had gone that way to try an apple cider milkshake at an Amish farm store next door but it was closed and we think we know why!
Click to enlarge
Today’s Suggested Music and Supplemental Resources
“Offering”  Video   Paul Baloche
Not related to today’s message apart from the parenthetical note on safe spaces: I value to powerful way Dr. Everett Piper the president of a college in Oklahoma tackled this issue, “College not a daycare” Video