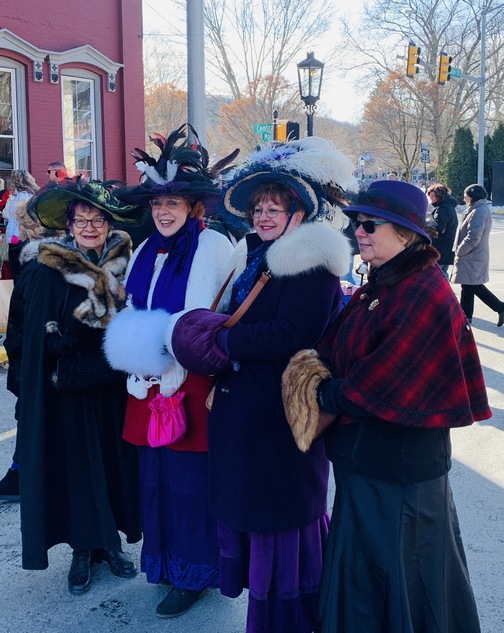 “The Last Message From Gabriel”
Message summary: Gabriel’s final message from heaven was “For nothing is impossible with God.”

“The angel answered and said to him, ‘I am Gabriel, who stands in the presence of God, and I have been sent to speak to you and to bring you this good news'” (Luke 1:19). “Now in the sixth month the angel Gabriel was sent from God to a city in Galilee called Nazareth” (Luke 1:26). “For nothing is impossible with God” (Luke 1:37). 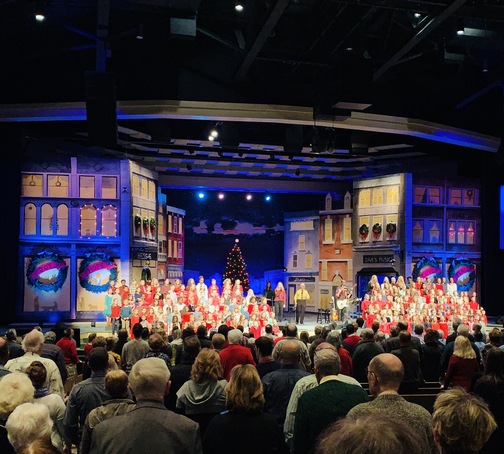 Yesterday in our church the “King’s Kids” choir sang. Every Christmas, in churches all over the world, children have a role in music and drama. During our years of pastoral ministry we had many children’s programs which prompted some interesting and often humorous memories.

Most Christmas programs will include a couple of children dressed as angels since angels have a vital role in the Christmas story. They’re abundant in both of the Christmas account narratives in Matthew 1,2 and Luke 1,2. 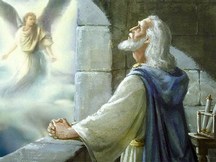 Only two angels are identified by name in the Scriptures; Gabriel and Michael. Though both are customarily identified as archangels, only Michael specifically has the designation of being an archangel (Jude 9). Of course the fallen angel also has a name, one all too familiar for the chaos he has contributed to.

Gabriel is mentioned in the Old Testament at the time of Daniel some 600 years before Christ’s birth (Daniel 8:16, 9:21). His ministry in Scripture is delivering messages from heaven to earth. In the Old Testament he was sent to give Daniel a message concerning the meaning of a vision, also to provide insight and understanding. 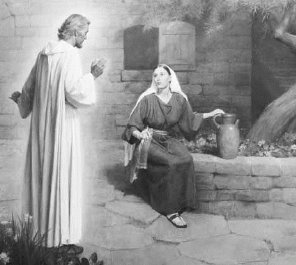 In Luke’s gospel only Gabriel gets the choice assignment to make two visits to earth during this time. These visits are six months apart and recorded in Luke 1. The first one was to aged Zechariah; the second one to young Mary. Both received a message regarding the birth of a son. Both were miraculous in nature.

Of course the remarkably unique message to Mary concerned the special work of God in her life in the supernatural conception of Jesus. “The angel said to her, ‘Do not be afraid, Mary; for you have found favor with God. And behold, you will conceive in your womb and bear a son, and you shall name Him Jesus. He will be great and will be called the Son of the Most High; and the Lord God will give Him the throne of His father David; and He will reign over the house of Jacob forever, and His kingdom will have no end.'”

Aware that such an announcement was not in keeping with the “facts of life” she inquired, “How will this be, since I am a virgin?”

Gabriel’s final words recorded in Scripture were not a technical answer to Mary’s question but rather an assurance of God’s almighty power, “The Holy Spirit will come upon you, and the power of the Most High will overshadow you” (Luke 1:35). It was specifically directed to Mary, but speaks to all of us as well. This is the testimony of an angel who had been working as a top associate at God’s side through the endless ages. He should know. His final words in response to Mary’s question were, “For nothing is impossible with God.”

The immutable God has not changed. The testimony of Gabriel stands true today. It’s true for you and it’s true for me, “For nothing is impossible with God”.

These words not only spoke to Mary when she received news that just didn’t make sense concerning her special role in the greatest birth of all time, but it also speaks to perplexing situations in our lives when God is at work, but we don’t have full understanding. Certainly Mary didn’t have the full picture during the angelic visit. We have the wonderful advantage of reading the Scriptures that tell the entire story, from Christ’s birth to His death and resurrection. Her story was just beginning.

Mary received these words in faith as she responded, “I am the Lord’s servant, be it unto me according to your word” (v.38). Her words expressed a servanthood attitude where submission is fundamental and being a servant of God is foundational to our Christian walk. What an exemplary attitude for us to observe and to espouse!

This is the way God works in all of our lives as our stories are presently being written. What a joy it is to be a child of God; to trust Him in the major and minor details of our lives. His plan unfolds in our lives, one day at a time, and we do well not to try to get ahead of His revealed plan, lest we lean on our own understanding rather than His. May we, like Mary, each have this response to God, “I am Your servant, Lord; be it unto me according to Your word.”

Daily prayer: Father, we read of Your supernatural workings throughout Scripture and we’ve witnessed it over the years as we’ve seen miracles of Your healing and saving power in the lives of others.  The power of the Most High overshadowed Mary and Joseph as she was chosen to conceive the Christ Child who came down from heaven to save us from our sins. When we lose sight of Your miraculous deeds in the daily grind of life and in the circumstances that baffle or discourage us help us to remember that You are a God of the impossible, nothing is too complex or broken that You cannot fix. Your mighty Spirit overshadows us day by day and You delight in us as we put our hope in Your unfailing love and miraculous power. Amen.

We want to thank all who have financially supported our ministry this past year (and some for many years!). We realize there are many fine ministries and causes requesting support at this time but if the Lord would lead you we surely need and appreciate the financial support from our readers and listeners. Like many ministries, we typically see a spike in giving at the end of the year for which we are most thankful. Our ministry labor is comprised of approximately half our time to Daily Encouragement and the other half to our chaplaincy ministry to companies for which we receive compensation. Each of these ministries essentially is the same as a part-time job (20+ hours weekly) for each of us. Our goal for many years is that each would provide half of our ministry expenses and income. If you would consider making a donation to our ministry see here for more information. To donate directly online here. This will open to a page that designates the offering to: WEBER,STEPHEN CHAP, Specialized Chaplaincy Ministry ID: 700001-237376

This last weekend we went up to northern Pennsylvania to primarily visit Wellsboro, which had a special “Dickens Of A Christmas” festival on Saturday. My brother Pat and his wife Laverne joined us, meeting us in Williamsport for the day together on Saturday. 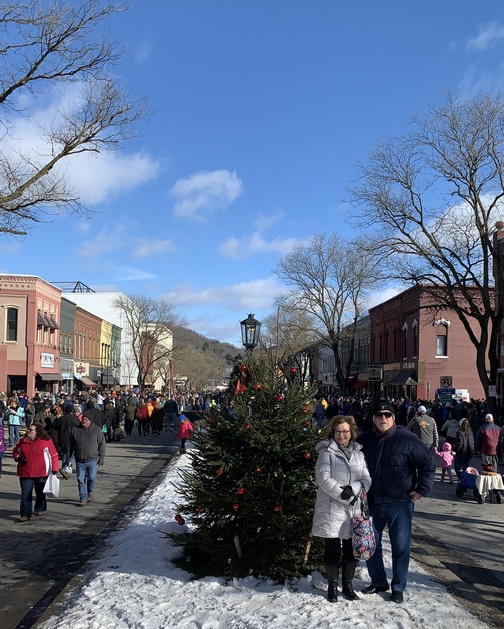 The main street is closed off and there were many vendors, street musicians and people dressed in costume. 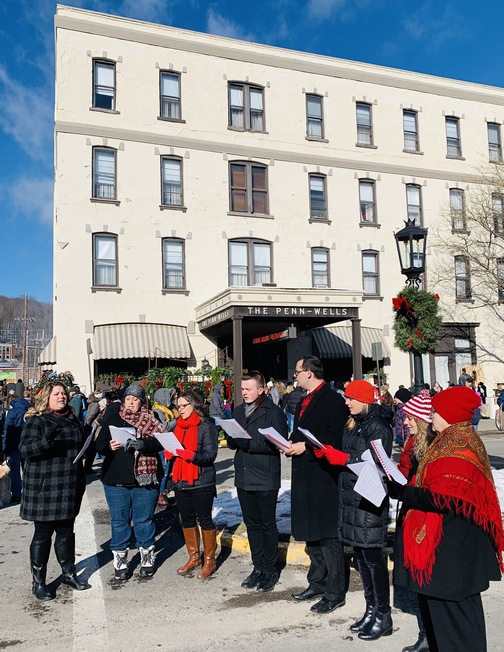 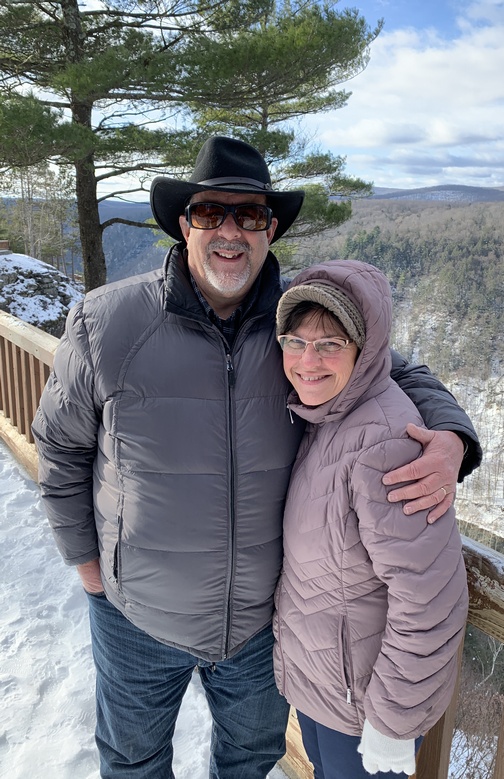 We also stopped by the Pennsylvania Grand Canyon which Pat and Laverne had never seen. 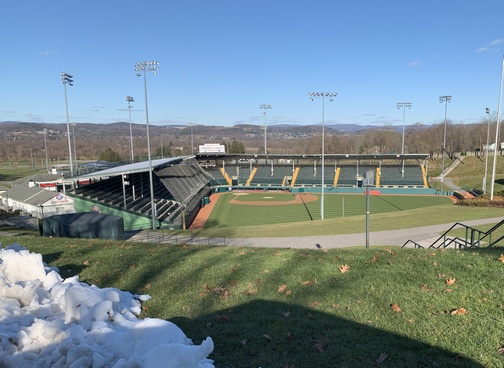 On the way back we stopped by to see the stadium where the Little League World Series is played in Williamsport, PA
(Click to enlarge) 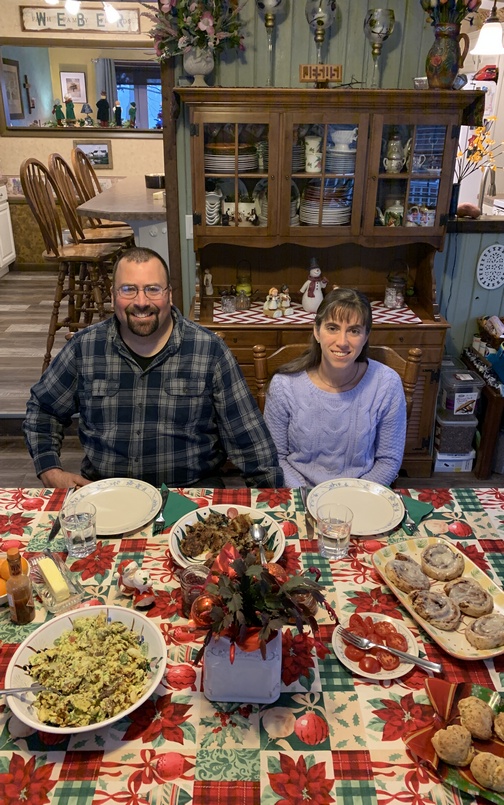 This morning we had Jason and Rebekah Oberholser over for breakfast. They serve in missions among the Navajo in New Mexico. Rebekah grew up in a church we served some 30+ years ago in north central west Pennsylvania! Their six children stayed with Jason’s parents in Chambersburg allowing for a lot of “grown up” conversation as they shared their mission and we had a nice time of prayer as well.

Last Friday we attended a company luncheon for the Val-Co company at Yoder’s
Restaurant in New Holland PA. My hat sort of sticks out!