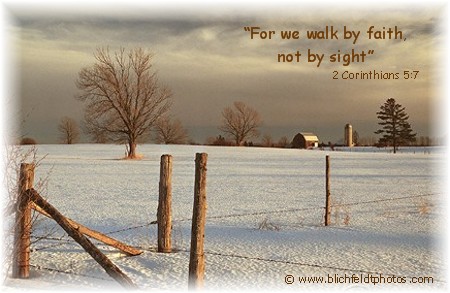 Winter scene in rural Michigan
Photo by Howard J. Blichfeldt (used by permission)
“2020”
Message summary: A vital spiritual principle is this: It’s so easy to see the earthly reality but far more difficult to see the equally valid spiritual reality. Fellow believer, may our eyes of faith be open as we enter into 2020. May Christ fill you with hope and assurance as you realize the protecting might of the heavenly hosts who are truly gathered around all of us.

“When the servant of the man of God got up and went out early the next morning, an army with horses and chariots had surrounded the city. ‘Oh, my lord, what shall we do?’ the servant asked. ‘Don’t be afraid,’ the prophet answered. ‘Those who are with us are more than those who are with them.’  And Elisha prayed, ‘O LORD, open his eyes so he may see.’ Then the LORD opened the servant’s eyes, and he looked and saw the hills full of horses and chariots of fire all around Elisha” (2 Kings 6:15-17).

Happy New Year to our Daily Encouragement readers. Our daughter Ester was in cheerful form as we stayed up late to bring in the new year and this morning she not only wished us a Happy New Year but also wished our Google device “Happy New Year” to which Google replied, “Happy New Year! I remember last year like it was only yesterday.” Perhaps you can try that line on folks you greet today!

We recently saw a post that said everyone will have perfect vision in 2020 which puzzled us at first! But we began to think about the new year of 2020 and caught on to what they were indicating.  After all, wouldn’t we all like to hear our eye doctor say, “You have 20/20 vision!” But as we have aged, like most, our vision has diminished. We are both now nearsighted and farsighted requiring bifocals so that we can go on about our daily duties giving little thought about the assistance we receive through our prescription lenses.

But even if we have 20/20 physical eyesight we will still have impaired vision in the spiritual realm. At times we’re nearsighted, focusing on that which has no eternal value. Other times we’re farsighted, seeing at a distance but we’re unable to focus on that which most begs for our attention.

An old hymn recognizes our visual deficiency in a prayer:

“Be Thou my vision, O Lord of my heart,
Naught be all else to me save that Thou art.
Thou my best thought by day or by night,
Waking or sleeping, Thy presence my light.”

A vital spiritual principle is this: it’s so easy to see the earthly reality but far more difficult to see the equally valid spiritual reality.

Today’s Scripture portion is set about 2,800 years ago. Elisha was a faith-filled prophet who had enraged the king of Aram with his accurate prophetical pronouncements that were in essence divinely given intelligence. In anger the king sent an army to the city to find Elisha. In the dark night they quietly surrounded the city in their attempt to capture Elisha.

Elisha’s servant woke up early and saw the vast army surrounding the city. He went to Elisha in panic and despair and asked, ‘Oh, my lord, what shall we do?’ With his physical eyes he could easily see the army and the situation looked altogether hopeless.

“Don’t be afraid,” the prophet answered. “Those who are with us are more than those who are with them.” Elisha, as a man of great faith, saw a reality his servant was unable to see. As I consider this passage I have wondered if Elisha lived in a state of faith where he could always see that which was invisible to others?

I’m a lot more like the servant than Elisha. What about you? I have no trouble seeing the enemy’s army. Sometimes they seem so massive and poised for attack. I can feel moments of despair as I struggle to see in faith the unseen spiritual reality.

Elisha didn’t rebuke his servant but rather prayed, “O LORD, open his eyes so he may see.” That’s my own prayer and my prayer for each reader today and for 2020.

Elisha’s prayer was answered immediately in a remarkable way. “Then the LORD opened the servant’s eyes, and he looked and saw the hills full of horses and chariots of fire all around Elisha.” The servant’s eyes were opened to see the spiritual realm, the protecting might of the heavenly hosts. And conversely, the Arameans who relied on their physical eyes to do battle, were blinded so that they were restrained from harming God’s servant (II Kings 6:18).

I firmly believe that this isn’t just an historical record of God’s help in ages past, but a powerful encouragement for all ages and all believers concerning the unseen reality of the spiritual forces surrounding us, for God does not change. A wonderful New Testament promise that we need to hide deep in our hearts is from I John 4:4, “You are from God, little children, and have overcome them; because greater is He who is in you than he who is in the world.”

Fellow believer, may your eyes of faith be open today. May Christ fill you with hope and assurance as you realize the protecting might of the heavenly hosts who are truly gathered around all of us.

Daily prayer: Father, in this new year of 2020 help us to walk by faith and not by sight. Give us divinely prescribed vision to see the hosts of the heavenly army who stand guard to protect us or engage in warfare against our enemy in the heavenly realms. We clothe ourselves in Your armor so that we can take our stand against the devil’s schemes. We stand against the powers of this dark world and against the spiritual forces of evil in the heavenly realms. May we walk in confidence in this new year of 2020 rather than fear as we trust You to protect and guide us in all our ways. Amen.
Today’s Suggested Music and Supplemental Resources
“Be Thou My Vision”  Video  Selah
“Open The Eyes Of My Heart”  Video  Paul Baloche

“Open My Eyes That I May See”  Video  The Heralds