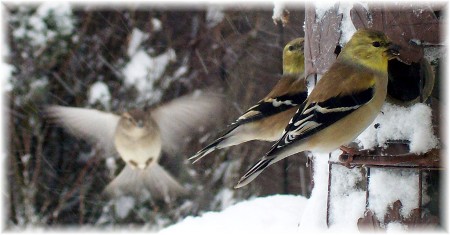 Brooksyne took this photo from our window of the goldfinches at one of our birdfeeders.

“Worthy Of Honor”
Message summary: As we look back over some 45 years of serving Christ we find great blessing in reflecting upon God’s chosen people who are worthy of honor. We have had them all though our ministry in churches we have pastored and in churches we have attended. Today we honor Veda Shibilo.

“Give to everyone what you owe them: If you owe taxes, pay taxes; if revenue, then revenue; if respect, then respect; if honor, then honor” (Romans 13:7).

Today let us consider those who are worthy of honor. In our fame-crazed culture honor is often focused on the famous; entertainers, athletes, politicians and others in the limelight. Even in the church world focus is generally directed at those who have well-known ministries. Now to be sure some famous people are worthy of honor but in our view so many are not, at least when primarily defining “worthy of honor” to those living a life honoring to Jesus Christ.

Those whom we believe are most worthy of honor are serving on the frontlines of Christian ministry in local churches all over the world. We greatly appreciate pastors, church leaders and others involved in Christian service. We are grateful for those who have dramatic testimonies of great deliverance from sin.

But the backbone of our churches and in our daily lives are people like Veda Shibilo. Have you ever heard of her? For most the answer would be “no”. But in this message while honoring Veda we want you to consider people like her in your own church and community. You know people like her and perhaps you might even blush to realize you may be numbered among them by your fellow brothers and sisters! We sure hope so. 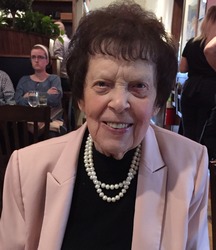 Veda was a vital part of the church we served in New England in the 90’s. She and her late husband Bill were among those who helped unload our U-Haul truck when we moved into the church parsonage in 1993. She had recently retired from a professional job and became my secretary for the  nearly eight years that I served as pastor of that church. She had been a part of that church her whole life and the earliest record I found of her Christian service in that church was as a teenager in the mid-1940’s when she worked with the children. Through the years she has blessed that church in many capacities such as Sunday School teacher, choir director and in many other roles. Shortly before her move to the nursing home she was still serving (some 75 years later) by restocking the offering envelopes in the church pew slots!

Last week Ester and I visited her as she is now in a nursing home. Her son, Greg, is her main caregiver now and is doing an outstanding job of practicing the Fifth Commandment. We attended the church service and heard expressions of esteem for her.

But we saw further evidence of her impact when we received an email from Nigel and Laifong. This couple attended the church for only a couple years and eventually relocated to the Boston area, but when Laifong read our note about Veda, she wanted to get in touch with her. She wanted to send some photos she had taken of Bill and Veda. Don’t you know that really touched Veda’s heart. Another couple from the New Bedford area, Rick and Liz, who were a part of our congregation but had changed churches many years ago also responded to the news about Veda by paying her a personal visit.

Perhaps you’ve learned recently about a brother or sister whose declining health has forced them into a nursing facility or they’re now under the care of a close relative. Make some time in your schedule to pay them a visit and uplift their day!

I concluded Ester’s and my visit with Veda last week by saying a prayer. Following my prayer for her she also prayed for me. That meant a lot.
Today consider people whom you need to honor. And a final challenge: Are you living a life “worthy of honor”?

Daily prayer: Father, we’re grateful for those You raise up to be servants in Your kingdom as instruments of blessing to others in the body of Christ. They not only serve as an example for us to follow, but they’re also an encouragement when we might otherwise lose hope. They often challenge us to walk circumspectly in the ways of the Lord, either by their quiet example, or by biblical truths they speak into our lives. We ask You to bless and encourage those whom you appointed to be Your servants for the furtherance of the Gospel and for the purpose of building up the body of Christ. Amen. 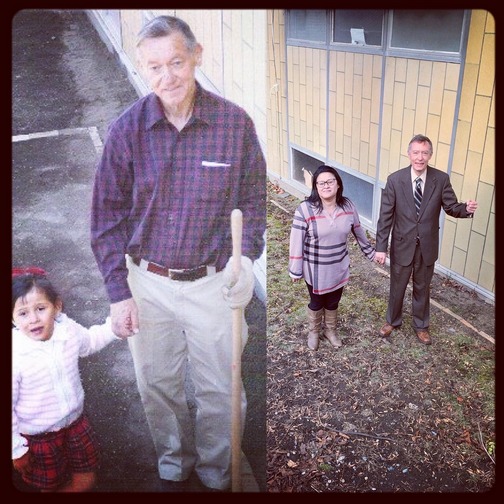 This photo in the foreground shows Bill Shibilo with Ester shortly after we moved to the parsonage in 1994. In the late spring, while Veda was at work in the office, Bill would take his shovel and break up the dormant ground near our parsonage, preparing the soil for our planting of a small garden. Two weeks ago we tried to recreate the photo with Bill and Veda’s son, Greg, standing in place of Bill, although we couldn’t find a shovel! Many years ago I shared a message about Bill Shibilo titled “A TRIBUTE TO A FRIEND”.
Brooksyne’s note: As we mentioned last week I stayed home when Stephen and Ester visited New England due to our elderly dog, Roxie, who needs extra care and attention at this time.  I hated to miss the opportunity to see her as I have a great deal of love and respect for Veda and her son, Greg. Ester has a special love for them as well since she often stayed with them when we attended conferences and looked up to them as grandparent figures. The most treasured gift that Veda ever gave to us was her voluntary commitment to pray for Ester every day. She is a faithful prayer warrior and she told me on more than one occasion that she prayed for Ester right along with her own two grandchildren every single day. She even prayed for her after our departure from Taunton in 2001. It meant a great deal then and is precious to my heart even today!

Stephen’s note: Bill and Veda and their son Greg demonstrate another quality that is very commendable. When I assumed the pastorate of that church in the early nineties I followed a pastor who had retired after 22 years of service. The church understandably reflected the style of his generation. In regard to musical style it was an organ with a song leader and mostly hymns sung from the hymnal.
We made changes reflecting more contemporary styles with a praise team, other instruments and also singing choruses (at that time using an overhead projector). However we still sang hymns!

In our recent visit as would be expected after twenty years the church has a considerably different worship style with even more instruments a larger praise team and two sets of drums with words being projected using PowerPoint. We noticed the hymnals had been completely removed.

It was probably somewhat hard for the Shibilos (like many in their generation) to see these changes during my tenure and since but they kept a sweet spirit and rejoiced that Christ was still being honored and uplifted. I was also pleased to see that the current pastor and congregation loved and honored the elderly like Veda, something we see lacking with some pastors and churches.
Today’s Suggested Music and Supplemental Resources
“Finish Well”  Video  West Coast Baptist College
“What You Leave Behind”  Video  The Talleys