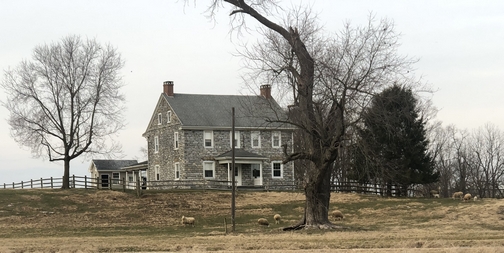 We enjoy this view on our long Donegal Creek nature trail across from our home. It provides such a peaceful setting with the sheep grazing in front of the old stone farmhouse. Brooksyne couldn’t get close enough to highlight the three small lambs.
“His Mercy Is More!”
Message summary: Our sins they are many, His mercy is more!

Listen to this message on your audio player. “O give thanks to the Lord of lords: for His mercy endures forever” (Psalm 136:3).  “Praise be to the God and Father of our Lord Jesus Christ! In His great mercy He has given us new birth into a living hope through the resurrection of Jesus Christ from the dead” (1 Peter 1:3). “Let us then approach the throne of grace with confidence, so that we may receive mercy and find grace to help us in our time of need” (Hebrews 4:16). Most mornings we listen to WDAC, one of our two local Lancaster County FM Christian radio stations. Today we were blessed by a song we don’t recall hearing before and the lyrics of that song inspired this message.
What love could remember, no wrongs we have done
Omniscient all-knowing, He counts not their sum
Thrown into a sea, without bottom or shore
Our sins they are many, His mercy is more
One repeated line in the song especially blesses us and will bring deep assurance as we appropriate this truth; “Our sins they are many, His mercy is more!”

What a joy today to serve the one and only true Lord and the One whom the Bible calls “the Lord of lords“. The Psalmist calls us to give thanks to the Lord and gives a reason that recurs over and over in this Psalm, “for His mercy endures forever”.

Three thousand years have passed since the Psalmist declared this truth and yet His mercy is still enduring. Today we see many reminders of the awfulness of sin and certainly there are many questions we have that still await an answer. Some will be answered in this life but others will not. And yet we are strengthened by God’s glorious power so that we are “able to pass through any experience and endure it with joy” (Colossians 1:9).

The amazing love and endless mercy of God continues to be poured out on the fallen human race. All who turn to Him in faith are recipients of His great mercy in providing salvation from sin and guidance in our daily lives. “In His great mercy He has given us new birth.” His mercy endures even in the hardest, darkest places and during the most baffling of times. We continue to “receive mercy and find grace to help us in our time of need”.

Are you serving the “Lord of lords”? Reaffirm your commitment today as you give Him thanks for His mercy that truly endures this day and forevermore! Truly, “Our sins they are many, His mercy is more!”

Daily prayer: Father, Your infinite mercy is among the greatest gifts You impart upon Your creation alongside the marvelous truth that Your love and compassion knows no bounds. Your power and authority far exceed any human role or title established on this earth, yet You love us personally with an inexhaustible and enduring devotion. We are never cast aside as being unimportant or worthless in Your sight, for You refer to us repeatedly as Your treasured possession. Your loving mercy is never-ending, always extended to us in our time of need. We can indeed declare ‘Your mercy is more’. In Jesus name. Amen.

“His Mercy Is More”  Video  The Acappella Company  (Congregational style)

“1,000 Tongues/O For A Thousand Tongues To Sing”  Video  Calvary Church Choir and Orchestra from this last Sunday’s service. Can you find Brooksyne!

Yesterday’s message had a challenge to pray for pastors and other leaders prompting this note from a hospice chaplain reader in Kansas:

About 2 years ago, the Palliative Medicine team with whom I work was hit hard with 9 of our patients dying in the course of a week. That same week we also received a record number of new consults. This was overwhelming for the team including me, who also was working to care for the team members as well as the patients. During a time of desperate prayer, the Lord interrupted me and asked, “You are missing a resource that you had back in Maine.” As I thought about that He revealed to me that I did not have a prayer partner for this ministry. He then revealed to me, after I asked Him, who that prayer partner was to be. Since that time, every week when I see Bob at church, he reminds me of two things, 1.) He loves me an 2.) He is praying for me. Things are so much better since I know that I have a person behind me praying each day for this ministry as Palliative Medicine and Supportive Care Chaplain. In addition to this, He and many others have prayed for my wife and I as we walked through the brain surgery that I underwent to remove a benign brain tumor back in December. I am now back to work full time (essentially) and full recovery is expected. As a person in pastoral service, this is my testimony of how important it is to have my Christian family bringing me and the ministry to which I am called before the Lord in prayer. Thank you for this message today.

Our daughter, Ester, reads our daily messages so today I want to dedicate the theme of this message to her. She is in Hershey Medical Center as of last evening. Once again, she is dealing with extraordinarily high INR numbers testing at 15.7 or higher (it’s the largest number the test results can detect at HMC).
Some of our regular readers may remember she has gone through this off and on for many years, the last time being in July. The doctors removed one of her medications and thought that the problem was finally solved, but now seven months later we are at it again.  She is being treated with intense doses of Vitamin K in hopes that the number will decrease as it should be between 2 and 3.
Ester is a trouper and has been since her birth almost 31 years ago being born with pulmonary atresia, going through five open heart surgeries, and now with her third pacemaker. But as she loves to tell others, “I’m a hupernikomen; that’s the Greek word for ‘overcomer'”.
She deals with Afib, with her heart racing to 222 BPM and that’s why she is on warfarin. She tests with a home monitor weekly the results of her INR and so I share a little info below regarding that procedure.

A prothrombin time (PT) is a test used to help detect and diagnose a bleeding disorder or excessive clotting disorder; the international normalized ratio (INR) is calculated from a PT result and is used to monitor how well the blood-thinning medication (anticoagulant) warfarin (Coumadin®) is working to prevent blood clots. However too high a reading means her blood is too thin.