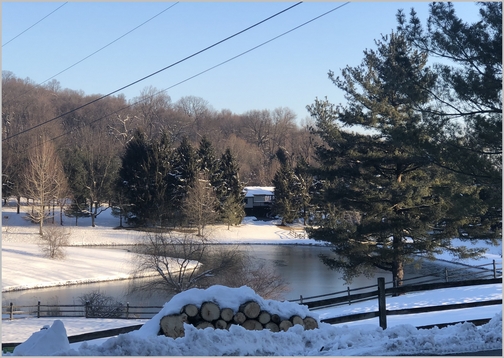 This scene is along Mount Wilson Road in Lebanon County. This photo is from last year since we still haven’t had a significant snow storm this season!

(Click on photo to enlarge)
“A Desperate Father“
Message summary: Do you have a desperate need in your life? Hold steady and trust in Jesus who speaks to us just as he did the father in today’s message, “All things are possible to him who believes.”

“Jesus asked the boy’s father, ‘How long has he been like this?’ ‘From childhood,’ he answered. ‘It has often thrown him into fire or water to kill him. But if you can do anything, take pity on us and help us.’ ‘If you can’? said Jesus. ‘Everything is possible for one who believes.’ Immediately the boy’s father exclaimed, ‘I do believe; help me overcome my unbelief!'” (Mark 9:21-24).

When we first began our ministry in planting a new church in northern Pennsylvania in the late 70’s we were bi-vocational for several years until the congregation grew to the size we could be supported. We both drove school buses! I drove a regular long bus and that was a challenge with some very unruly students.
But Brooksyne had a different challenge. She drove a van of children who were severely disabled both physically and mentally. We both especially remember an older boy in his late teens who had a severe condition both mentally and physically. Each morning his devoted mother would bring him out in his wheelchair/bed and load him on to the front seat of the van. Always punctual and pleasant, she would be waiting each afternoon for the van to return her son. What a hard lot in life.
Today there are many caring for their children and grandchildren with disabilities. We regularly visit with a man whose granddaughter was severely injured in an auto accident as a baby and now is severely impaired. Many of these children of course grow up to be adults with disabilities.
Our pastor has been preaching through the Gospel of Mark and this Sunday covered Mark 9:14-29, a colorful passage that includes today’s text. Most of us have read this portion of Scripture many times in the course of Bible reading and heard sermons on it. It concerns a desperate appeal by a father who brought his son to Jesus. He described the son’s dilemma like this: “Teacher, I brought you my son, who is possessed by a spirit that has robbed him of speech. Whenever it seizes him, it throws him to the ground. He foams at the mouth, gnashes his teeth and becomes rigid.”
What an awful condition! Can you imagine how these parents felt as they helplessly looked on while their son was experiencing what sounds like a grand mal seizure. If you’ve witnessed an individual going through this you know how frightening it is. In fact one of the students on Brooksyne’s van would periodically go into a grand mal seizure on the way to school and require special attention.
Brooksyne and I discussed this passage following church on Sunday and acknowledged that in previous considerations of this passage we had mostly paid attention to:
The words of Jesus who told the needy father, “Everything is possible for one who believes”. Since childhood we have often quoted Jesus’ words, “All things are possible to him who believes” (KJV), as we prayed for people who brought needs to us.
The honest confession of the desperate father who said, “I do believe; help me overcome my unbelief!” Most of us can identify with that kind of faith.
But as we further discussed the story we were struck by the dilemma the child’s parents had faced day after day, year after year. They surely had often sought help in hopes that someone could heal or deliver their son, who by now was perhaps a young adult. He repeatedly threw himself into the fire and into the water. These parents must have been physically and emotionally exhausted trying to look after and protect their suicidal son.
The father appealed to Jesus, “But if you can do anything, take pity on us and help us.” Do you know those who have made a similar appeal in a time of desperate need? Have you ever made such an appeal? Are you appealing to Jesus about a critical matter in your life right now?
If so, hold steady and trust in Jesus who speaks to us just as he did the father in our story, “All things are possible to him who believes.”

Daily prayer: Father, we are thankful for the words of Christ who says, “All things are possible to him who believes.” The desperate father whose son needed physical healing was very candid with Jesus when he responded, “I do believe. Help me overcome my unbelief.” Father, You know our hearts and You know that’s just how we feel about certain unresolved troubles in our life. We want to believe but in these matters we struggle with unbelief. Just as You met this desperate father and healed his son, You will meet us in our hour of need. So our prayer is like that of the father, “I do believe. Help my unbelief.” In the name of Jesus we pray. Amen.
Today’s Suggested Music and Supplemental Resources
“I Believe, Help Thou My Unbelief”  Video  Bill Gaither
Lighthouse Vocational Ministries is a local ministry that seeks to provide meaningful work opportunities for developmentally challenged adults. There are many ministries and services like this probably one in your area. It is wonderful to see value placed on these individuals who for many different reasons have a hard life. We are blessed in our age to have these types of services but we wonder how it was for people with these types of disabilities in the past.
Finally today:
The last several days we have shared about Ester and her elevated INR. She did stay in the hospital again last night but we surely expect she will be discharged today. Thank you to so many who have written assuring us of prayer. That means a lot!