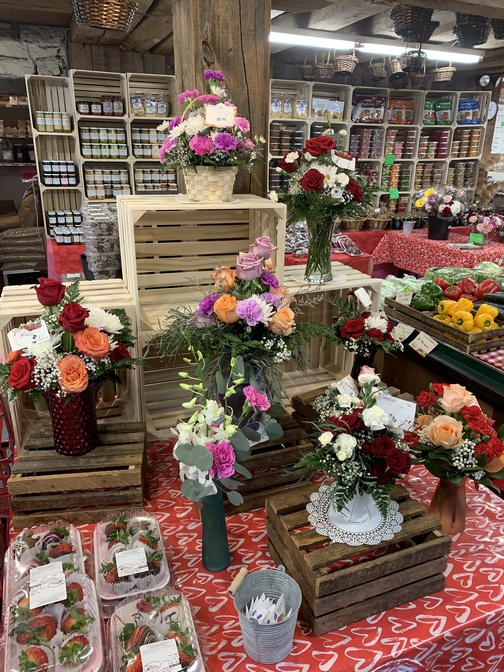 Valentine flower arrangements at the Village Farm Market east of Ephrata, PA.
“Transforming, Enduring Love”
Message summary: Practice enduring love. God sure has this kind of love and calls us to love in the same way! “Love never fails” (1 Corinthians 13:8). 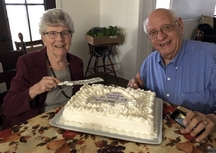 We first met Jim and Dorothy Schmidt at a conference in Boston twenty years ago. At that time they worked with a mission agency called SEND International. They were also involved in the Finisher’s movement and Dorothy, also known by her friends as Dottie, was a longtime regional representative for Stonecroft Ministries that heads up Christian Women’s Club. For many years they were also youth leaders and served in prison ministry.  We have grown much closer since their move from Ocean City, New Jersey to Lancaster about four years ago they took up residency at Calvary Homes, one of the many retirement communities in our area.

Their life story is an excellent example of transforming, enduring love. We had met them in their senior years and at that time were blessed by their commitment and enthusiasm for the Lord. Jim was a career sales manager for a large company and used his retirement years in service for the Lord.

They both exude such grace that we were taken by surprise when we later heard them give their testimony which included a very troubled marriage in their early years.

Both were raised in non-Christian homes, but as a child Dorothy was given a little blue Bible and had memorized some Scriptures even though she didn’t understand the meaning of them.

The Lord began to draw Dorothy to Himself using that little blue Bible and the verses she had tucked deep in her heart. She came to understand the love and forgiveness of God, accepted Christ as her personal Savior and began a new life. Of course she then desired that Jim would also follow the Lord, but he was very resistant and wanted nothing to do with her new faith. So she took their two young sons and began to faithfully attend a Bible believing church.

The Spirit of God was at work and eventually Jim began to attend church with his family. In time he sought a meeting with the pastor. At the end of the conversation the pastor, compelled by the Spirit, boldly leaned forward, put his finger right in Jim’s face, and declared, “Jim, you’re going to hell!” Dorothy looked at the pastor in shock and disbelief. Knowing Jim as she did, she felt such a bold approach would only anger and turn him away. But it didn’t. It’s the very reality shock Jim needed to bring him to a crossroad where he would decide one way or the other. The pastor went on to share the message of salvation and Jim was gloriously saved.

That was 55 years ago. They both began to serve the Lord together and now in their mid-eighties they will celebrate their 65th wedding anniversary in April. They’ve had deep heartache and loss in recent years with their son, Jimmy, dying of cancer about seven years ago and their other son inexplicably walking away from the family shortly thereafter. They have seen increased health problems in recent years, the inevitable effect of catabolism (aging). But their love endures!

This is Valentine’s Day and so much emphasis will be placed on young love including the kind that is here today and gone tomorrow. But today we want to focus on enduring love, the kind of love that God has for us.  Some of you reading our message may very well identify with the Schmidts’ story before they began the spiritual transformation. We implore you to look to the supreme example of enduring love which is Jesus Christ, of course.

Just before Ester was released from Hershey Medical Center yesterday afternoon, she and Brooksyne met Sheila, a nurse who worked many years in the Cardio Vascular Unit where Ester was admitted four days earlier. Sheila was handing out valentine cards she had made for the patients. As they visited together she told Brooksyne that she was a Christian and had prayed 27 years for her husband to become a believer. Her prayer was finally answered in April of last year. Her story along with the Schmidts is a reminder to keep on praying and believing if your spouse is not yet a believer. Never give up!

There are some of you reading this message who have begun that process of transformation but your marriage problems are mounting. A fulfilling marriage does not work on auto pilot since couples deal with different backgrounds, personalities, opinions and interests. If yours is a troubled marriage seek out a Christian counselor who can help you. Go online and find resources including Christian books dealing with troubled marriages. And above all pray and hold steady!

Practice enduring love. God sure has this kind of love and calls us to love in the same way! “Love never fails” (1 Corinthians 13:8). Be encouraged today,

Daily prayer: Father, Your Word indicates there’s rejoicing in heaven when a loved one is called home, but there’s surely a lot of rejoicing as well when an ungodly cycle is broken where generations have not followed in Your ways. We thank You for the transforming power evident in couples such as Dorothy and Jim who are committed to You and influence others for Your kingdom. On this Valentine’s Day we pray for couples to be wholeheartedly committed to their marriage partner. May theirs be an enduring love for at the end of one’s life the greatest gift we can give one another is enduring love. It will hold us together when other things around us fall apart. Amen. 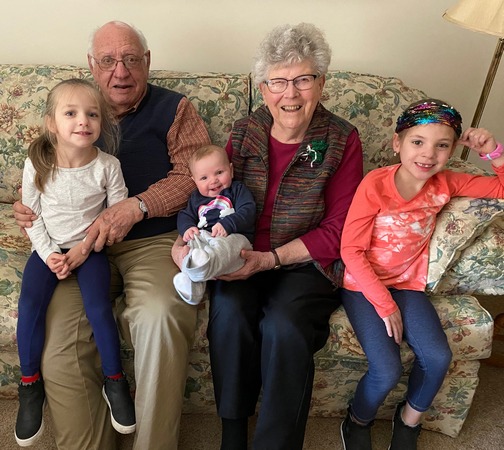 Jim and Dorothy with three of their great grandchildren. 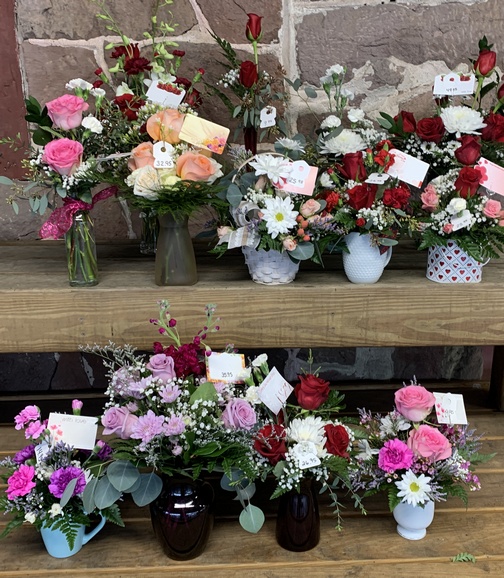 More Valentine flower arrangements at the Village Farm Market.
Brooksyne’s Note:  Jim and Dorothy have become like parent figures to me. They’re one year younger than my parents who have been with the Lord now about twenty years. Their fervor for the Lord does not diminish even with the painful affliction they endure due to various health issues. Dottie launched a much needed ministry for the women at Calvary Homes nearly two years ago. It’s called Women Connecting and meets the first Monday of each month. Its format is very similar to Christian Women’s Club. When I shared my testimony last November and presented the Mayflower Voyage at Women Connecting I found the women to be so receptive and excited about meeting together each month. There are usually about 100 women who gather. Jim is such a wonderful support to Dottie in this ministry. They also serve on the hospitality committee and welcome new residents at Calvary Homes.

Update on Ester: Ester was discharged yesterday afternoon. Upon release her INR was slightly elevated so this morning Brooksyne will take her for blood work and work closely with the Anticoagulation clinic in adapting her warfarin dosage in accordance to the results of her INR readout.

Finally today a word to widows and widowers: We are mindful of several spouses who read our messages who have lost a spouse in recent years, some just in the past year. As painful as your loss was (and is) you can be blessed today just knowing your love in words and actions was an enduring love that was of such comfort and blessing to your spouse in the greatest battle he or she dealt with on this side of eternity. Being there and doing for your spouse what only a loving partner can do during one’s transition into eternity is the highest calling of a marriage partner. May the Lord speak tenderly to your heart today and reassure you with these words, “I will never leave thee nor forsake thee.”

Today’s Suggested Music and Supplemental Resources
“Broken Together”  Video  Casting Crowns  Brooksyne’s Note: This song shows a marriage that went through rough times but in the end it endured. Be sure to watch it to the end! This song reminds me a lot of my parents’ marriage that in the end prevailed. Their love was never more evident than the last six weeks before Daddy died of cancer. Ever since then I’ve thought of the blessing they enjoyed at the end that would not have been possible if they had followed through with the many times they considered separation or divorce.
“His Mercy Is More”  Video  Matt Boswell and Boyce College Choir

“He Who Began a Good Work in You” from Philippians 1:6 Video  Steve Green

Marriage Resources from Focus On The Family 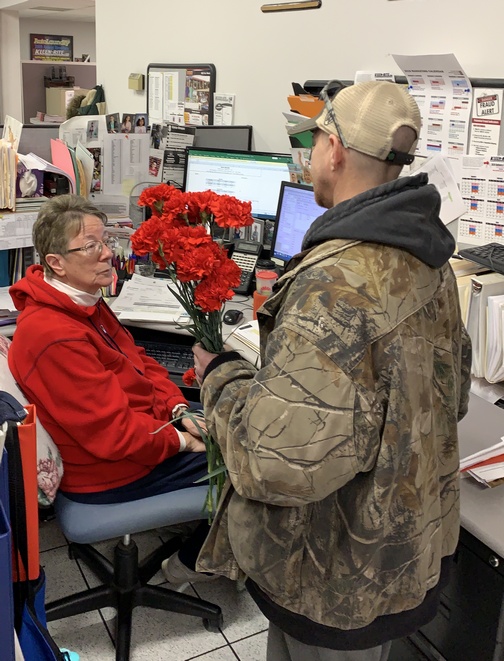 Tommy is passing out carnations to all the ladies at Kleen-Rite today. In January last year Tommy’s father died after working for Kleen-Rite for 35 years as their senior technician known for his expertise and dedication. Before his death on Valentine’s Day every year he personally delivered a red carnation to each female employee. This is the second Valentine’s Day that Tommy has taken his father’s place and honored the women in this way. It is even more touching now since it reminds the employees of their friend, Tom, who was very much a part of their lives at Kleen-Rite and it is also a reminder that Toms son, Tommy, is a kind gentleman just like his dad.