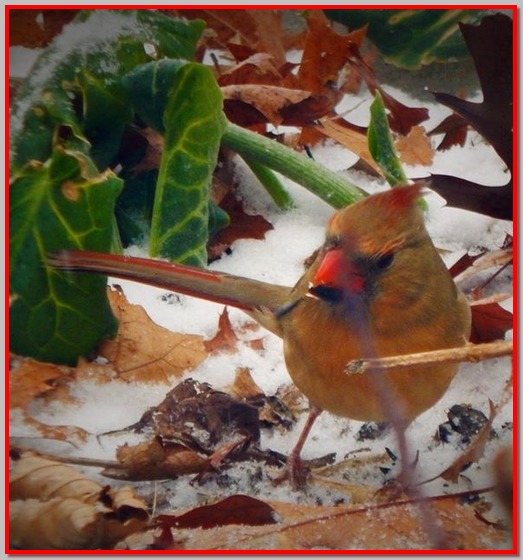 Ester took this photo of a female cardinal foraging in our front flower bed during one of the few snowfalls we’ve had this season.

“Are You A Christian?”
Message summary: Let us boldly, with a humble heart, declare to our world, “I am a Christian”!

Listen to this message on your audio player. “And he (Barnabas) left for Tarsus to look for Saul; and when he had found him, he brought him to Antioch. And for an entire year they met with the church and taught considerable numbers; and the disciples were first called Christians in Antioch” (Acts 11:25-26). “For I am not ashamed of the gospel of Christ: for it is the power of God unto salvation to everyone that believeth; to the Jew first, and also to the Greek” (Romans 1:16). “However, if you suffer as a Christian, do not be ashamed, but praise God that you bear that name” (1 Peter 4:16). Last week as I walked through a company I met a new employee. Before introducing myself I asked him what his name was. He answered, “Christian”. I then asked, “Are you a Christian?” He put his head down and then told me he was moving in the other direction. I challenged him to get back on the right side and follow Christ and gave him some literature. He seemed appreciative and I pray that my brief witness made an impact. I also expect to follow up in future visits.
I am a C (pronouncing letters)
I am a C-H
I am a C-H-R-I-S-T-I-A-N
And I have C-H-R-I-S-T
In my H-E-A-R-T
and I will L-I-V-E  E-T-E-R-N-A-L-L-Y!
(Of course you speed it up each time you sing a round!)

Today attempts have been made to develop another label for those who follow Christ, in part due to how “Christian” can have such a broad meaning as well as those who have given the designation “Christian” a bad name. The most popular replacement is “Christ-follower” but of course that is not necessarily going to solve the tendency of any word or phrase to broaden or for someone to give it a bad name. I think there’s good reason for sticking with “Christian” going back to the Bible.

The Bible identifies the time “Christian” was first used to identify Christ’s disciples in our daily text, “The disciples were first called Christians in Antioch”. The Greek word means “follower of Christ”. It comes from Χριστός (Christos), meaning “anointed one”, with an adjectival ending borrowed from Latin to denote adhering to, or even belonging to, as in slave ownership. The word Christian is a transliteration of the original Greek word Χριστιανούς (Christianous – the “ous” at the end designates plural). Strong’s concordance asserts that the word was first used by the Gentiles in describing Christ’s followers. It seems to me it could also have been a word in which they self-identified.

Whichever, the name stuck and is used elsewhere in the Bible. It was clearly a word used by non-believers as seen in King Agrippa’s response to Paul, “In a short time you will persuade me to become a Christian” (Acts 26:28). But later Peter used the word to describe his fellow disciples, “but if anyone suffers as a Christian, he is not to be ashamed, but is to glorify God in this name” (1 Peter 4:16). But from the second century onward “Christian” was accepted as a title of honor.

I am a Christian! I am part of the company of the redeemed first called Christians in Antioch nearly 2,000 years ago. Today this great movement has grown and has representatives all around the world. Scores of Christians have lived out their appointed time on this earth and are now in heaven. One of the remarkable aspects of this daily encouragement ministry is its broad geographical distribution.  The only information required to be on this list is a valid email address but we have had personal responses from every continent and many countries all around the world.

In populous African cities there are those who believe in Christ and on this day they will bear a witness for the Lord. In remote jungle villages in Papua, New Guinea dedicated missionaries are sharing the message of Christ with primitive, previously unreached, tribes. In London England a missionary engages in a witness to Muslims.

Indeed in virtually every part of the world, from huge cities to rural villages, there is a group of people called Christians. I especially want to remember today my brothers and sisters in Christ who, as the Apostle Peter wrote, “suffer as a Christian” (1 Peter 4:16). It’s so easy for us who live in lands where we have not personally experienced physical persecution to forget, yet the Bible clearly calls us to remember.

What a place heaven will be! Several times in the book of Revelation we see the indication of the broad scope of Christ’s redemption. I really enjoy being in multi-cultural settings. For one thing it gives me a peek of heaven’s inhabitants. Here’s a glimpse from the book of Revelation, “And they sang a new song: ‘You are worthy to take the scroll and to open its seals, because you were slain, and with your blood you purchased men for God from every tribe and language and people and nation’” (Revelation 5:9). Note especially this phrase: “Every tribe and language and people and nation”. Today, reflect on what a joy it is to be among the redeemed and worship Him who sits on the throne. Let us boldly, with a humble heart, declare to our world, “I am a Christian”!

Daily prayer: Father, I am not ashamed of the gospel of Christ: for it is salvation to all who believe upon Jesus as the Son of God. It’s natural and inviting to join in with a crowd of believers and declare with exuberance our privilege and joy to be a Christian. But when we stand alone against a defiant crowd or are confronted by those who declare evil against the Christian believer it becomes a grave responsibility and conviction to honor Christ by proclaiming our allegiance in a hostile setting. We pray for those confronted with that choice this very day. We also pray for families and friends who grieve the loss of their loved ones who took a Christian stand by staying true to their Christian faith though it cost them their earthly lives. May these families, all over the world, be consoled by the Scripture in Revelation 2:11 declaring that those faithful unto death will be given “the crown of life”. That is our prayer today that we be found faithful in life and faithful unto death, however that comes to us. In the name of Jesus our Lord and Savior we pray. Amen.
Today’s Suggested Music and Supplemental Resources
“He Reigns”  Video  The Newsboys 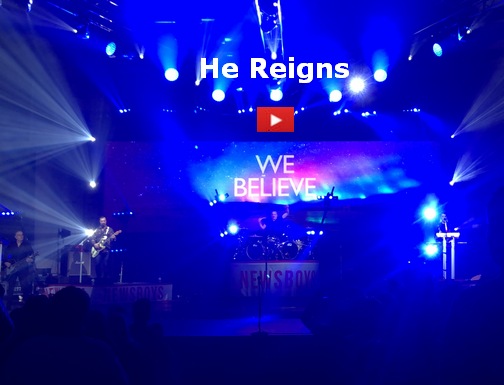 Last Friday night Ester went to a Newsboys concert in Lancaster and took this photo. This group has been around (in various iterations) since 1985 when we were relatively young! We chose this song because of the people in the video with faces of Christians from all over the world.