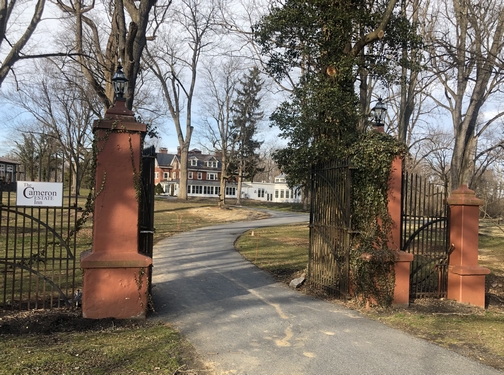 The days have been warm so Mollie and Sadie have enjoyed long walks including this one at the Cameron Estate Inn on Donegal Springs Road. The grounds have several trails to be enjoyed by both canines and humans.
“The Abyss Of Moral Insanity“
Note: Today’s message is a bit longer than normal and covers a topic that may be distressing to some. It begins with an incredibly true story which is indented.
Message summary: We call out the faithful remnant to earnestly seek the Lord and be diligent in our efforts to retain the knowledge of God! May our godly knowledge be the filter through which all other information is understood, embraced, or rejected.

Listen to this message on your audio player.
“So God created mankind in His own image, in the image of God He created them; male and female He created them” (Genesis 1:27). “Furthermore, just as they did not think it worthwhile to retain the knowledge of God, so God gave them over to a depraved mind, so that they do what ought not to be done” (Romans 1:28). “They perish because they refused to love the truth and so be saved. For this reason God sends them a powerful delusion so that they will believe the lie” (2 Thessalonians 3:10,11).
Many years ago (the late seventies/eighties) we were foster parents and did so with the desire to make a difference in a child’s life. To this day we remain in contact with several of the foster children we cared for, who of course are now grown. But even at that time the social workers tended to be young and it was evident to us that political correctness was creeping into the social framework of foster care. In a recent conversation Brooksyne learned just how crazy things have gotten, as she tells us in the following story:
I visited with an employee who is usually out on the field but he happened to be in his office on this particular afternoon. Bill and Susie (not their real names) are a Christian couple with grown children who live in a very rural area in a neighboring county. For several years they have been caring for special needs foster children, including those who come with medical equipment enabling them to survive. They presently have a little girl who is severely disabled.
Bill told me about an encounter that Susie had with the state social worker managing their case. She took their foster child for a visit with two of her older siblings during a family visit. Her brother was “transitioning” to a “girl”, the sister was “transitioning” to a “boy”. The social worker introduced them by their new names, the names that reflect their imaginary new gender.
The siblings’ change in appearance and names was startling to the younger foster child as well as Susie. Seeing the confusion in her foster child’s eyes and mannerisms, Susie suggested that they deal with the topic later after the children had visited for a while.
The social worker let Susie know that later is not the time, but right now was the proper time to set things straight with the siblings’ new imagined gender. She launched into a very uncomfortable and confusing lecture directed to the five year old foster child.
“If you want to be a doctor, if you want to be a fire fighter, if you want to be an astronaut you can be anything you want to be.” (That may be true when they grow up.) The social worker continued, “If you want to be a butterfly or if you want to be a unicorn, you can be whatever you want to be….”
Shaking my head in disbelief I asked, “Was she being serious as she said these things, the butterfly, unicorn, etc.?” “Yes, she was” he dejectedly replied. Of course, the encounter has made this very devoted couple rethink their role in reaching out to needy children as they are now expected to uphold the philosophies of the Youth and Children’s Services rather than their Christian convictions. This ridiculous encounter along with the body language of the social worker shocked Susie as it should.
Bill and Susie later had a meeting with her and it didn’t result in them feeling any more comfortable in her expectations of their role as foster parents. There is more to the story, but this is the gist of what the transgender, non-binary, gender neutral and all the other new words created that seek to conform to the whims and wishes of a very troubled segment of our society.
The other night I, Stephen, was thinking about this story, and in seeking to spiritually understand world conditions, the phrase in our daily message title came to mind, “The Abyss Of Moral Insanity”.

“Abyss” is defined as “a deep or seemingly bottomless chasm”. I learned that “moral insanity” is actually a psychological term but in the context of this message we mean the insanity that results in an individual and society when God’s truth and moral standards are rejected. It is described in the Bible as a “depraved mind” and a “powerful delusion” that leads people to believe a lie.
Today’s text is an insightful verse from a powerful book. Of course the entire Bible is powerful but Romans provides a particular depth in understanding the human condition, the tragedy of sin and scope of divine redemption. In seeking to understand and discern the current world situation and the immense falling away from godly standards I have been pondering this portion a lot. It describes the inherent natural tendency to sin in each person’s heart since the fall of Adam. The NASV has a concise description for this section heading, “Unbelief and its Consequences”.

Suppression of God’s truth leads to “futile thinking” (Ephesians 4:17) and although there is self-assessment of being wise, in reality it leads to foolishness (Romans 1:21,22). Sin causes us to exchange God’s truth for the lie (v. 25).

But many, really most, do “not think it worthwhile to retain the knowledge of God”. Instead they have chosen the heavily trampled broad way which leads to destruction (see Matthew 7:13-14). Substitutes for the knowledge of God abound materially, philosophically, educationally, and even in the spiritual realm. These substitutes are billed as “the real thing” and any other outlook may be ridiculed or viewed as “behind the times”.

The consequence of this failure to retain the knowledge of God is that “God gave them over”. This is the third of three occurrences of this phrase in Romans 1.  God’s restraining influence that would keep people living in proper relationship with Him and with each other is removed. This phrase “God gave them over” should put the fear of the Lord into every heart and mind. The master deceiver may have us thinking we are in control, but the Bible tells us, “The one who sows to please the sinful nature from that nature will reap destruction” (Galatians 6:8).

There is grave consequence in failing to retain the knowledge of God, “God gave them over to a depraved mind”.  The Precept Austin commentary notes that this depraved mind “speaks of a mind that is so clouded by sin that it is no longer able to make reliable moral judgments. Here we have gone beyond deliberate iniquity to something much more frightening. At this stage people have lost the desire and the ability to think clearly. They have lost their mind and don’t even know it. The result is a world that has left God far behind. It is a society with all restraints removed, a culture devoid of all sense of right and wrong, where everyone is doing what is ‘right in his own eyes’.”

A “depraved mind” is a result of not retaining the knowledge of God. “Depraved” is not a word we often hear or use frequently. We may recall the theological term “depravity of man”, which describes the consequences of the fall. Other versions use the word “reprobate”, “base and condemned”, “degenerate”, “debased”, “corrupted”.

John MacArthur writes, “Unregenerate people cannot think properly about spiritual truth because they have a ‘depraved mind’. Only God can turn on the light in the human heart so that it can respond in saving faith to the gospel of the glory of Christ.”

We call out the faithful remnant to earnestly seek the Lord and be diligent in our efforts to retain the knowledge of God! May our godly knowledge be the filter through which all other information is understood, embraced, or rejected.

Daily prayer: Father, we want to be a people whose hearts and minds are one with Yours. Through our diligent study and application of Your living word our thoughts and attitudes are formed. Keep us faithful to the truth of Your knowledge. We stand in firm opposition to the world’s substitutes; the acceptance, condoning, and celebration of anything You describe as sin. The world may dress it up, commercialize it, make it appealing, and cover up the disastrous results it brings on the individual, his or her family and society at large. Help us to read, retain, and regard Your knowledge as our pattern for life. In the name of Jesus we pray, amen.

Today’s Suggested Music and Supplemental Resources
“This Little Child”  Video  Scott Wesley Brown This is a recent version with a much older Scott Wesley Brown but as I recall the song was written in the eighties and practically has a prophetic tone. It speaks of the increasing fallen state of the human race observable at that time but which has greatly increased in the last 30 or 40 years.
Finally today from Brooksyne: One other bothersome thought comes to mind from the conversation I had with Bill. During his and Susie’s visit with the social worker she blurted out, “I just can’t understand why all these Christians want to take these children and indoctrinate them with their religious belief.” Bill told me, it really troubled him and either he responded to her or wanted to say (I really can’t remember which), “Have you considered that it is Christians who are coming forward to care for these needy children!” So true!

This last weekend we saw this nonsensical sign at the Ronald McDonald House in Philadelphia.