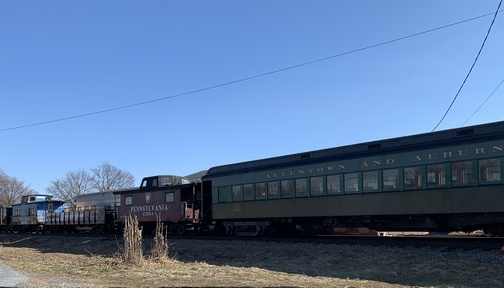 Yesterday we passed by these old railroad cars and cabooses on a siding east of Reading, PA.

“The Blessing Of Helpful People“
Message summary:  Who are some helpful people that have blessed you? In what ways might another describe you as being helpful in ministry?

Listen to this message on your audio player.
“Get Mark and bring him with you, because he is helpful to me in my ministry” (2 Timothy 4:11).
On Sunday we went to a church service in the Lehigh Valley followed by a retirement luncheon held in honor of Tina Kester. For 33 years she served as secretary in the church where my brother was pastor for about 25 of those 33 years. Over time we developed a close friendship with Tina and her husband, Larry, and were pleased to hear the many expressions of appreciation from her church family and friends. Many guests came to celebrate Tina’s day, including a friend all the way back from her Junior High days. In fact he was the guest worship leader.
On the day before we received word that Veda, my secretary in the church we served in New England, went home to be with the Lord. Ester and I visited Veda in January and we shared a tribute to her at that time (see here). She and her late husband Bill and son Greg were tremendous blessings to us during the years we served that church in the 90’s.
Today we want to consider the blessing of helpful people. We are prompted by the two ministry helpers mentioned above but many have helped us in our ministry and we certainly hope we have been helpers as well. Just consider people like Tina, Veda, and Mark.
2 Timothy is the last letter we have from Paul and in the last chapter he acknowledges that, “My time of departure is near” (2 Timothy 4:6). Several requests were made of his long-time associate Timothy from the practical such as, “Bring the cloak that I left with Carpus at Troas” (v.13a) to the intellectual “and my scrolls, especially the parchments” (13b). This indicates that Paul wanted his tools for study, that he was still eager to learn all that God wanted to teach him, though his time of departure was near.

But today let’s consider a personal request, “Get Mark and bring him with you, because he is helpful to me in my ministry” (2 Timothy 4:11). We could focus today on Mark, who at one time had deserted the missionary team and caused a sharp division between Paul and Barnabas (Acts 15:36-41). In that case second chance Barnabas proved right and later Mark’s relationship with Paul was also restored.

Bible teacher David Guzik observes, “This is evidence of a restoration of trust in Mark from Paul. Paul had wanted nothing to do with him in Acts 15:36-40”. The Precept commentary reminds us that “The life of Mark stands as a testimony to the grace of God, Who is ever ‘The God of the Second Chance’. Many of God’s greatest servants failed miserably at the start of their course, but returned to finish the race in a God-honoring fashion.”
In this very personal appeal Paul states concerning Mark, “He is helpful to me in my ministry”. What a contrast to Demas mentioned in the previous verse who deserted Paul during this very needy time. Various versions render the word “helpful” as “profitable” (KJV) and “useful” (ESV).
Today there are scores of helpful people such as Veda and Tina and Mark. Helpful people are rarely in the limelight nor do they seek it. Yesterday Mike Poppa, the pastor who first hired Tina in the 80’s, was guest speaker and summed up Tina’s contribution to her local church: “Tina didn’t see her role of secretary as a job but a calling.” Whether your involvement in your church or ministry setting is that of a leader, teacher, clerical worker, grounds keeper, janitorial services, maintenance worker, kitchen coordinator, or any of a multitude of other small or big roles required for a local church/ministry to function, may you also see it foremost as a calling from God.
Who are some helpful people who have blessed you? In what ways might another describe you as being helpful in ministry?
Be encouraged today,
Stephen & Brooksyne Weber

Daily prayer: Father, when You redeemed us from a life of sin we became a part of Your heavenly kingdom and want to serve in Your kingdom. We want to be of blessing and assistance to those who walk in truth alongside us. Those You call You also equip not only with knowledge and skills, but also character traits that build up Your kingdom and enhance other’s lives for good. Show us how to be a light to the world and a godly example to our brothers and sisters as we come alongside them in service to Your kingdom, seeking to bring You glory and to build others up in the faith. In Jesus’ name we pray. Amen. 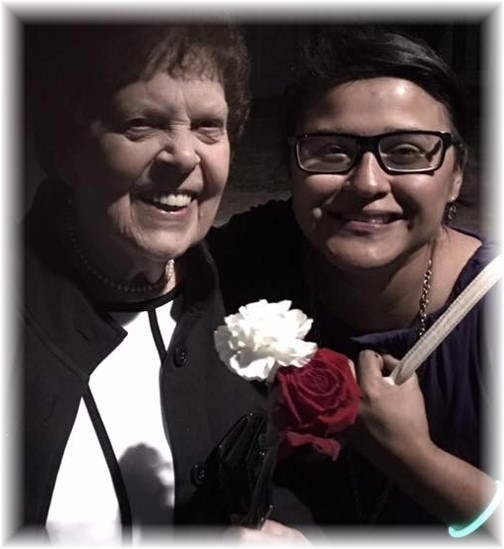 This photo of Veda with Ester was taken in June 2016 when we were up in Newport, RI for a wedding. (It was taken outside in the dark night.) 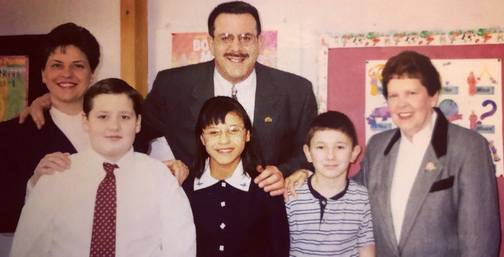 This photo was taken 19 years ago on our last Sunday serving the good people in Taunton, MA. It was taken in Ester’s Sunday School classroom where Veda was her teacher. Ester was 11 at the time and standing with a couple of her classmates. 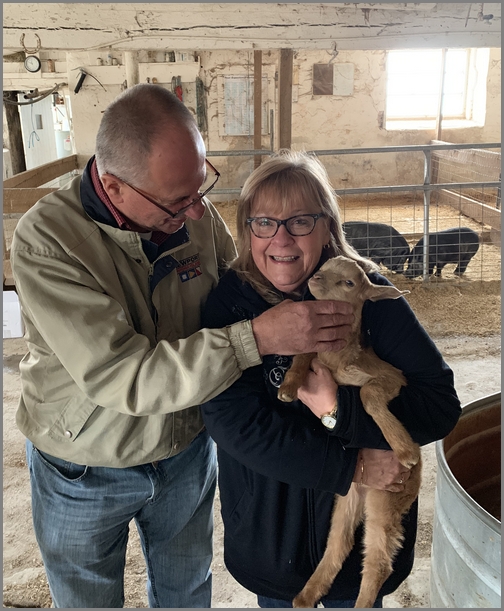 Tina and Larry have visited us several times through the years. We took them for a visit to the Old Windmill Farm last Spring. Like Brooksyne, Tina is crazy about goats. 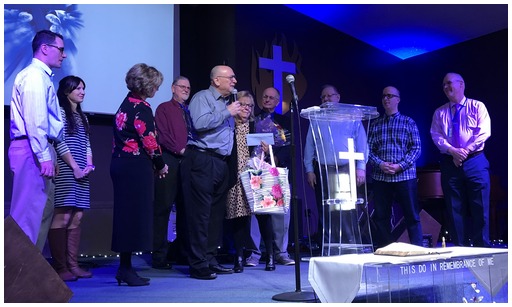 Yesterday’s service included a time of honoring Tina with words of appreciation from Women’s Ministries and others. Stephen’s brother, Pat, is at the mic sharing of his respect and esteem for Tina’s many years of loyal service, just before he prayed over her.
Today’s Suggested Music and Supplemental Resources
“I Believe”  Video  Jimmy Fortune  Following the luncheon there were several video tributes from friends unable to attend the gathering. One video was from Tina’s favorite gospel singer Jimmy Fortune! She was shocked and ecstatic that his face would surface with a personal message of congratulations to her, thanks to her current pastor, who arranged the surprise.

It’s interesting all the videos people place up on YouTube such as “Pennsylvania man captures all walks of life crossing log bridge” video I like this video since I have always liked logs across streams! Shows the variety of wildlife we have here in Pennsylvania although this was taken in the mountains.