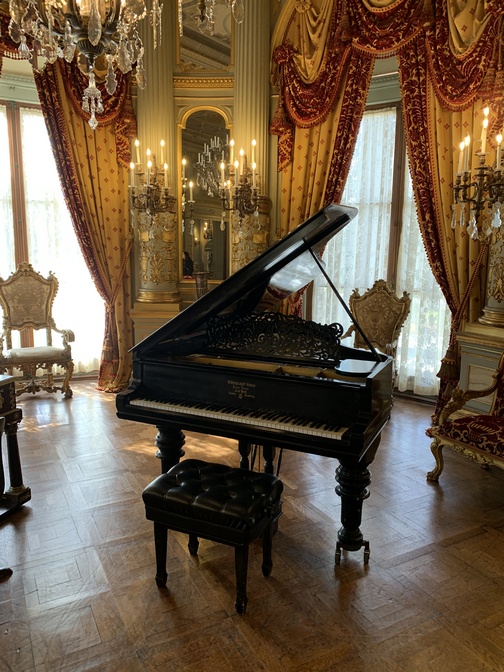 Steinway piano in “The Breakers” mansion in Newport, RI displayed in one of the seventy room Vanderbilt summer cottage.
“In Mansions of Glory”
Message summary: Remember this world is not our real home. Our Lord is coming back and we will one day be living in a place that will make Newport or any other supposed “paradise” on earth seem like a squatter’s village!

Listen to this message on your audio player. “In my Father’s house are many mansions: if it were not so, I would have told you. I go to prepare a place for you” (John 14:2).
In mansions of glory and endless delight,
I’ll ever adore Thee in heaven so bright;
I’ll sing with the glittering crown on my brow,
If ever I loved Thee, my Jesus, ’tis now. 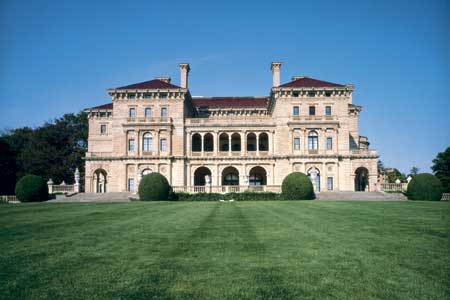 Newport, Rhode Island is a rather quaint seaside city on Aquidneck Island where the super rich of the gilded age built their “summer cottages” in the late 1800’s. These cottages are actually huge opulent mansions built along the ocean with breathtaking views, where the rich came from all around the country and overseas to socialize during the summer for about six to eight weeks.

This last weekend we took a bus tour of Newport and visited “The Breakers”, perhaps the most famous of the Newport mansions. As we walked through we considered the contrast between the lifestyle of the super rich and the common man. But actually wealth is a continuum from abject poverty to the super rich lifestyle. Considering the conditions in which people live all around the world most of us have more in common with the super rich then the desperately poor.

Many years ago when we lived in Taunton, MA we toured the “Marble House” with a group of fellow ministers along with our wives. This “cottage” cost $11,000,000 in the late 1800’s to build. As we walked through the palatial interior several of us were humming an old gospel song titled, “I’ve got a mansion just over the hilltop in that bright land where we’ll never grow old”!

But those who wined and dined in this opulent residence are long gone. It’s very unlikely that they gave much attention to their souls, but of course only God knows. The tour guide told us that the owner of the Marble House built this mansion for his wife and gave it to her on her birthday. Two years later she was married to a mansion owner just up the street, so we know that riches really can’t buy or secure love. A fitting word for them and for all who ever live is the soul probing question of our Lord declaring, “What does it profit a man if he gain the whole world but forfeits his soul?”. Big mansion or little shanty, what will a man give in exchange for his soul?

Our daily verse has inspired, comforted, and encouraged believers for centuries and is the source of many Gospel songs (30 in the “Song Select” database alone). It’s actually the only time the word “mansion” is used in the KJV, translated from the Greek word “mone” which is often translated as “abide’, with its derivative being “abode”.

Modern versions usually translate the word as “rooms” or “dwelling places” and they have been unfairly criticized by some for this.  I suppose we get in our minds it will be like a large mansion on this earth and we don’t want that dispelled. Hey, after all, if we didn’t get a mansion on this side we like the assurance of thinking one awaits us in our eternal abode!

Well, as we pointed out, the Greek conveys the sense of “abide”. The dominant feature of heaven will not be the extravagance of our abode but the extravagance of abiding with Jesus in all His glory. We will be living in the very presence of “Jesus Christ, who is the faithful witness, the firstborn from the dead, and the ruler of the kings of the earth. To Him who loves us and has freed us from our sins by His blood, and has made us to be a kingdom and priests to serve His God and Father–to Him be glory and power forever and ever! Amen” (Revelation 1:5,6).

Remember this world is not our real home. Our Lord is coming back and we will one day be living in a place that will make Newport or any other supposed “paradise” on this earth seem like a squatter’s village!

Daily prayer: Father, I can hardly wait to see what Jesus has been preparing for those who love Him, since His ascension into heaven nearly 2000 years ago. Knowing that the heavens and the earth were created in one day, we cannot begin to imagine all that is being planned for our eternal dwelling over the past 2000 years. Like the bridegroom preparing his house for the bride, we so look forward to the Marriage Supper of the Lamb where we will worship Jesus in all His glory. He, who is the faithful witness; He, who loves us and has freed us from our sins by His blood; He, who loved us enough to taste of death that we deserved; He will be our center of worship where we will praise and glorify Him forever and ever. Amen.
Today’s Suggested Music and Supplemental Resources
“My Jesus, I Love Thee”  Video  Casting Crowns

“I Can Only Imagine”  Video  MercyMe
“Blessings”  Video  Laura Story 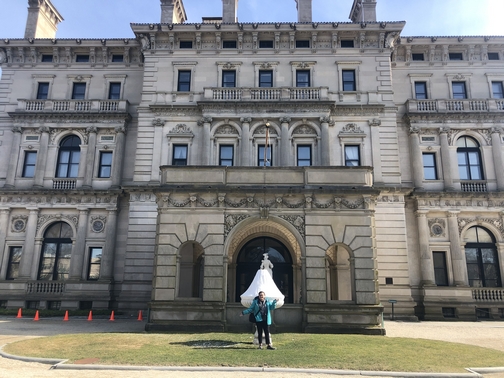 Ester in front of “The Breakers” 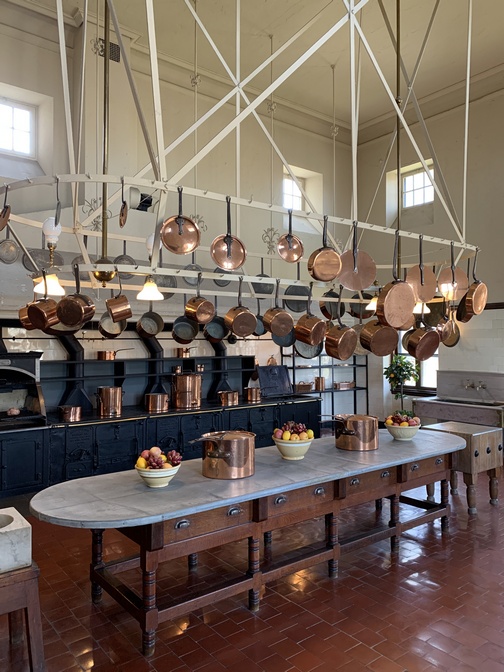 The kitchen located downstairs to keep down the noise of the servants’ preparation of the food and to avoid a fire getting out from the ovens and setting ablaze “The Breakers” mansion. A dumbwaiter was used for sending food up to the family and guests and putting away beautiful china in tall cabinets. Lots of copper! 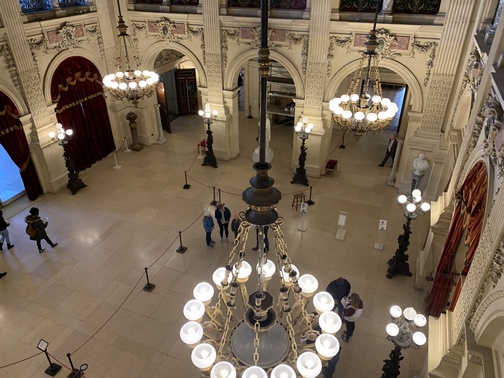 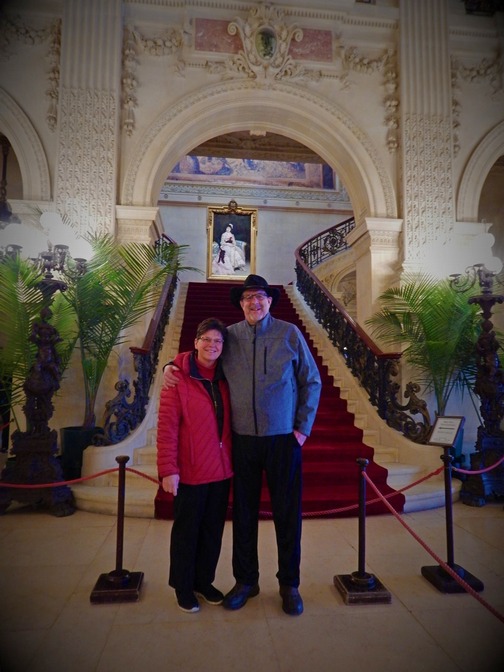 Standing at the stairway in the Great Hall and two rather simple folks. 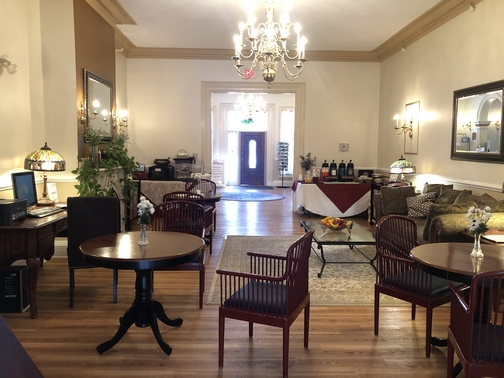 We stayed at “The Carriage House Inn” which at one time was a very large home, later a nursing home, and now a rather cozy inn for guests!
Finally today: 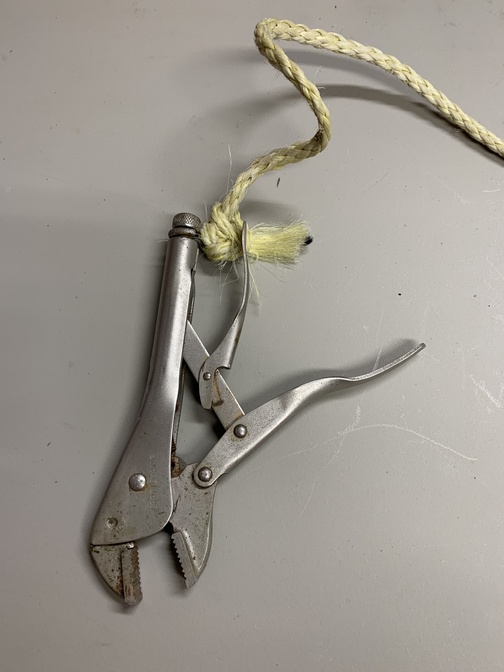 The Amish are well known for their resourcefulness and ingenuity (sharing that with the Yankees). Last week we shared some photos of our barn roof being replaced by our Amish friend Jesse and his son Moses. To get the new metal roof panels up to the upper roof Jesse devised this method; he used the vice grip to hold the metal roof panels and lifted them up with a rope!