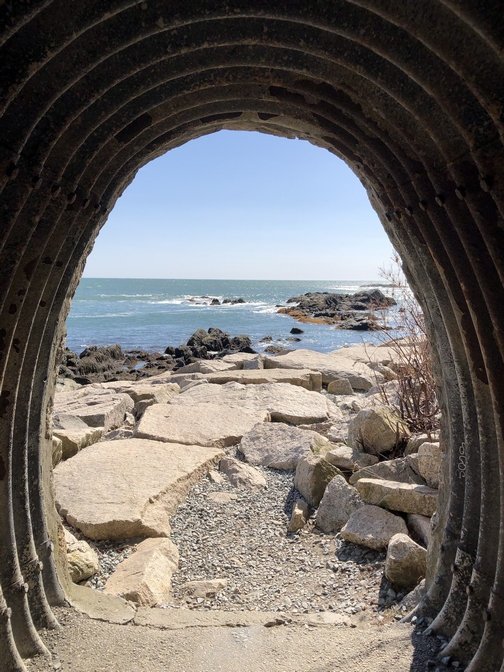 Cliff Walk tunnel view, Newport, RI
“God is Mightier“
Message summary: A view of the ocean reminds us of God’s mighty power when we see the vast body of water and watch the great breakers crash into the shore. God is mightier than any problem we face, personally, in our nation and in the world. God is mightier!

Several times a year we enjoy seeing the mighty ocean. This last weekend we visited Newport RI which is on Aquidneck Island where ocean views can be seen to the east, south and west. The Cliff Walk runs parallel to a cliff leading down to the ocean on one side and the spacious back yards and views of the Newport mansions on your other side. It’s certainly unlike any of our country walks here in Lancaster County, though we very much enjoy them as well!

Many will have a first-time memory of seeing the mighty ocean. Our favorite memory of a first ocean sighting took place about 11 years ago when we took our friends Jesse and Anna Ruth, to the ocean in Ocean City, NJ. They had four children at the time who had not yet seen the ocean. As we approached the ocean we began to pass larger bodies of inland water and the older kids would excitedly say, “Is that it?!” Finally we had that first view of the vast ocean and of course the kids were impressed.

We spent some time on the beach and the three older children sure liked playing in the water. After awhile Anna Ruth wanted their younger son, Eli James, who was about two at the time, to rest for a few minutes but he could hardly hold still saying, “I wanna go back in the big pond”. In his perspective from living on a farm the only body of water he was familiar with was his farm pond. We teased one another for the rest of the trip and ever since at him referring to the mighty ocean as “the big pond”.

Do you have a first ocean sighting memory?

Now that we live inland we find it a blessing to only be about 3 hours from a shore point where several times a year we can view the mighty ocean, walk along the sandy shoreline or boardwalk, and hear the crashing waves all the while experiencing other nautical sights, sounds, smells and fresh tasty seafood!

As we watch the pounding waves hit the shoreline the words to an old gospel hymn, “Like a Mighty Sea” comes to mind:

The mighty ocean has inspired quite a number of Scripture verses, hymns, and settings for writings; both fiction and nonfiction throughout the ages. The above Psalm portion extols the might of God. The sea referred to by the Psalmist was likely the Mediterranean Sea. Israel is small geographically and Jerusalem is not far from the Mediterranean Sea.

A view of the ocean reminds us of God’s mighty power when we see the vast body of water and watch the great breakers crash into the shore. The mysteries that lie below the sea only underscore the awesomeness and depth of God’s great power. Truly the waves are a fitting analogy of God’s ceaseless mighty power but the Lord on high is even mightier! How mighty is God? “He’s big enough to rule the great universe, yet small enough to live within our heart.” *

Daily prayer: Father, any words we speak or analogies we use cannot adequately describe Your infinite mighty power. It miraculously reaches beyond the heavens, is visible throughout all the earth, and is resident within our own hearts. It is only in experiencing a personal relationship with you that we begin to tap into the inexhaustible power and might that flows from You, Almighty God. Even as the waves of the ocean are powerful and wash up on shore may You fill our lives to overflowing so that Your mighty presence is visible in our lives and spills out to those around us. In Jesus’ mighty name we pray, Amen.
Today’s Suggested Music and Supplemental Resources
“Like A Mighty Sea”  Video  Cheryl and Steve Thomson

“What a Mighty God We Serve”  Video  Integrity’s Hosanna! Music

“Greater Than All My Regrets”  Video  Tenth Avenue North

(Brooksyne describes her 3½ mile walk last Sunday afternoon on the Cliff Walk.)
My first experience on the Cliff Walk was in 1992 when my parents invited me to join them for their vacation to New England. My mom had read a lot about the Newport mansions so that was a major stop for us. We walked on the Cliff Walk for probably a mile at the time. I walked it many times when we lived in Taunton, Massachusetts but never for the entire 3½ miles. So I decided to walk it all on Sunday afternoon as the weather got warmer. Stephen and Ester flew a kite and explored a lighthouse while I was doing the walk. Ester does not have the physical endurance for such a long walk due to her heart problems and still recovering from his knee injury Stephen wasn’t comfortable with a long walk yet. 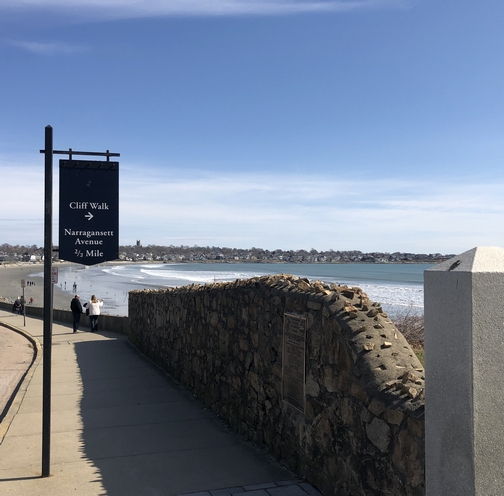 The north end of the Cliff Walk begins at the western end of Easton’s Beach and ends 3½ miles later at Bailey’s Beach, though there are several entrance points along the way for those who want to take a brief walk or to see a particular spot on the trail. 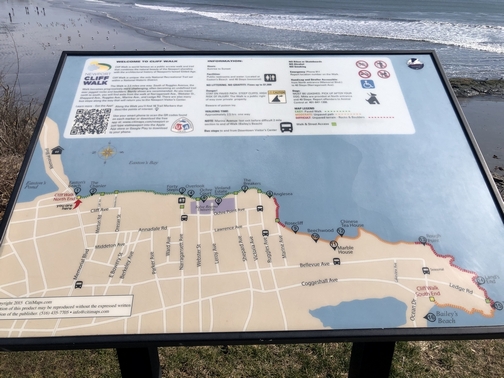 Click to enlarge this map to see the various roads that intersect with the trail. Also note the portions in red that were a bit treacherous! 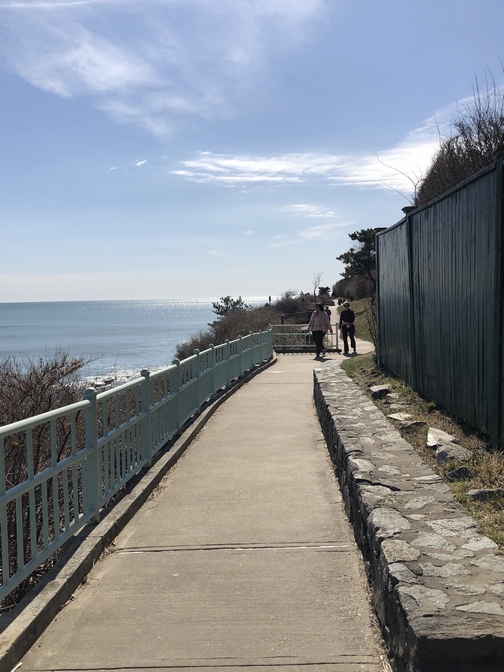 The first part of the walk is essentially a sidewalk with views on both sides, though my eyes were drawn to the water. 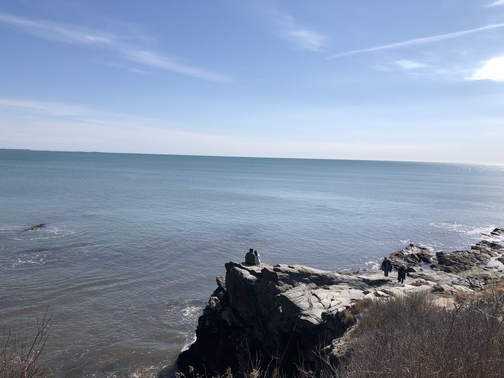 A view off the cliffs. People who ignore signs of danger get off the trail and walk on the cliffs. (In my younger years I was among such people, till I married Stephen who finds these settings more alarming than I.) 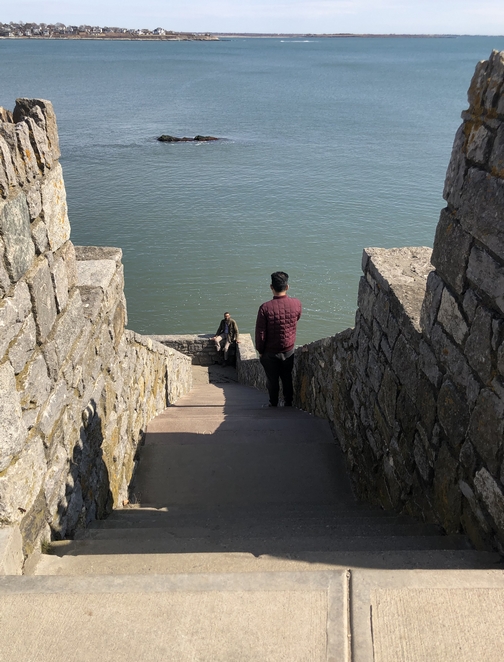 Down the 40 steps to the ocean. Restored in the 1990’s these 40 steps bear the names of the donors who gave $3,000.00 toward their step. Originally built in the 1880’s the 40 steps was a gathering place for the servants during their spare time who worked at the mansions during the gilded age. They fished, danced, and socialized at this spot. 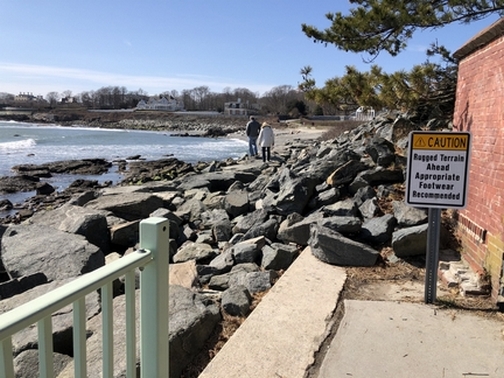 Toward the end of the walk it was rather challenging with no obvious trail and lots of rocks. Further up the trail it got even more hazardous and a bit tricky when you were near the cliffs and on unstable rocks. The Lord sent an older gentleman, along with his Irish Setter, Grace, who helped me navigate the hazardous part of the trail. He told me he first walked on the Cliff Walk in 1955 and for the next 40 years he walked it 5 to 6 times a week before he moved away, and only recently moved back. I was glad that the Lord sent him my way! 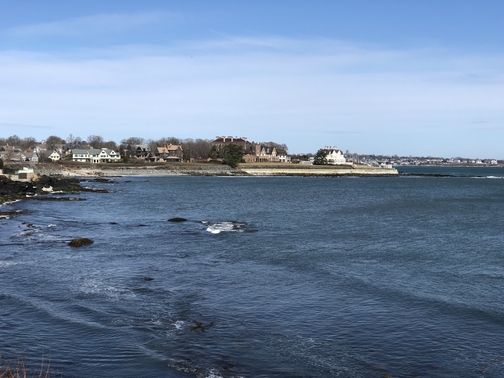 The mansions – a few of them anyway. Not only are the old mansions visible, but if the homeowners are willing, you can view their back yards while walking the trail. However, some of the chain link fencing separating the mansions from the walk have colored screen inserts that block the view, though people have torn holes in various places to take a peek or a photo. 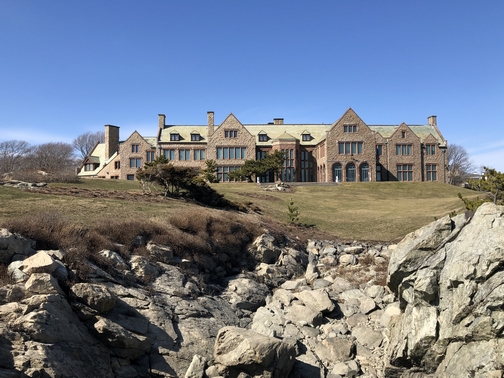 A view of one of the newer and not so famous mansions. 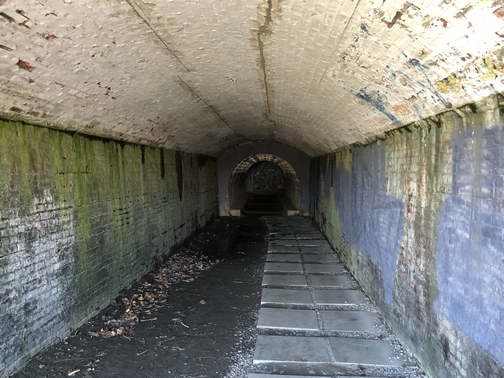 The walk included two tunnels, the least pleasant view along the entire trail but it brought a little variety to the setting. Our lead photo today is the ocean view from one of the tunnels. 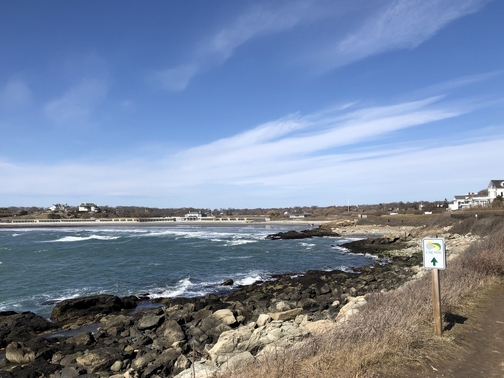 It took me 2.5 hours to complete the walk which included several stops to take photos and check out some beautiful sights. The Cliff Walk said to allow for 2.5 to 3.0 hours to walk the entire length so I guess my pace was right on target. It was such a beautiful, invigorating walk and I can’t wait to do it again on my next visit to Newport.