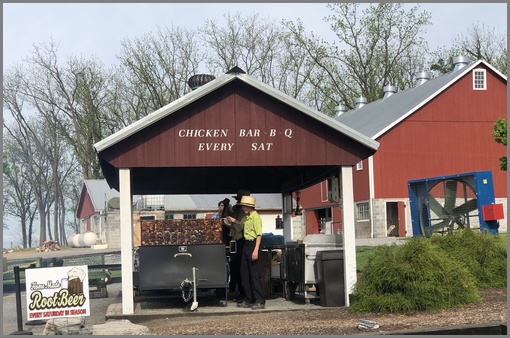 A great sign of spring in rural Lancaster County is the Amish-run chicken BBQ’s on Saturdays. This BBQ is at the Country View Farm Market & Greenhouse along 743 south of Elizabethtown, PA. Location on Google map
“A Lesson From Goliath’s Sword”

Message summary: Self-assurance and self-sufficiency will ultimately lead to self-defeat. But steadfast trust in Almighty God and our acknowledgment that apart from Him we are powerless will lead us to ultimate victory!

“David asked Ahimelek, ‘Don’t you have a spear or a sword here? I haven’t brought my sword or any other weapon, because the king’s mission was urgent.’ The priest replied, ‘The sword of Goliath the Philistine, whom you killed in the Valley of Elah, is here; it is wrapped in a cloth behind the ephod. If you want it, take it; there is no sword here but that one.’ David said, ‘There is none like it; give it to me'” (1 Samuel 21:8,9).

Several weeks ago I gave the Lapp children a handmade sword made from a very light weight wood, and so for safety reasons, they cut off the pointed tip. They’ve had a fun time using it when they play act the story of David and Goliath.

The other day I was over and the children wanted me to participate in the skit. Would you believe I (big Stephen) played the role of David the young shepherd boy and two year old little Stephen played the 9′ giant, Goliath. As I pretended to load my sling with stones Goliath (little Stephen) gruffly declared with as much defiance as any two year old could muster, “I’m not a puppy!” Of course he paraphrased, in his two year old vocabulary the Scripture, “Am I a dog, that you come to me with sticks?” Well, I showed him and slung my pretend sling and knocked Goliath out. He fell to the floor doing a good job of pretending to be dead for a toddler who doesn’t understand what dying is yet. 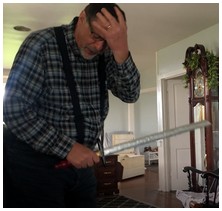 But then we turned it around so that I was Goliath and little Stephen was David. I came at him holding the sword and gruffly declared, “I’m not a puppy!” He then whirled his “sling” round and round until the pretend stone hit me right between the eyes.

At this point, like his older siblings he regularly played with, I was supposed to crash down to the floor as if dead. Little Stephen, along with his siblings, watched and waited for me to fall but this part of the story I did not play act. As many of you might have guessed this Goliath didn’t fall down lest he couldn’t get back up off the floor after the playacting was over (at least without a lot of real ugly effort). Young Stephen just had to settle for a badly wounded Goliath leaning against the wall.

Even those who are nominally Biblically literate are usually familiar with the story of David and Goliath, which resulted in David’s great victory over the 9′ giant Goliath and the trophy sword he recovered from his opponent. The entire story is found in 1 Samuel 17.

Our daily text records an interesting event that happened sometime after the famous battle took place. Following the battle David became a hero, more popular in the eyes of the people than King Saul, which caused Saul to go into an uncontrollable jealous rage. Most of the latter chapters of 1 Samuel record David fleeing from Saul as he invariably pursued him day after day. It was a very despairing time and this led David to record his physical, emotional and spiritual battles which are revealed in several of the Psalms. We often find ourselves turning to these very Psalms when we too are dealing with battles of one sort or another.

In today’s Bible portion David is in need of a sword. He asked Ahimelek, “Don’t you have a spear or a sword here? I haven’t brought my sword or any other weapon, because the king’s mission was urgent.” Ahimelech the priest, for some unspecified reason, had Goliath’s massive sword wrapped in a cloth. The priest replied, “The sword of Goliath the Philistine, whom you killed in the Valley of Elah, is here; it is wrapped in a cloth behind the ephod. If you want it, take it; there is no sword here but that one”.

You can imagine just how enormous and heavy Goliath’s sword must have been! His sword weighed 600 shekels, about 15 lbs. By contrast a normal long sword usually weighs between 2½ lbs. to 4½ lbs. at the very most. But David said, “There is none like it; give it to me”. He surely knew that was the case!

What practical purpose did David have in mind for this massive sword? It seems rather unlikely he would use it as a weapon given its size, although it’s certainly possible. He may have had some other utilitarian use for it or perhaps he intended to recycle the metal!

But in considering this I believe David’s interest is not a practical use, but a powerful reminder, even a visual object lesson, of God’s help during a past major conflict. If he held that sword up to his current opponents they would have been reminded of David’s victory over Goliath!

Humanly speaking young David was no match for the mighty Goliath. He knew that. But he was relying on God for the victory. His great battle cry had been, “You come against me with sword and spear and javelin, but I come against you in the name of the LORD Almighty, the God of the armies of Israel, whom you have defied” (1 Samuel 17:45). The huge sword of Goliath was a tangible reminder and evidence of God’s help in a time of great need. Do you have something like the sword of Goliath in your life that is a reminder of a great victory?

Self-assurance and self-sufficiency will ultimately lead to self-defeat. But steadfast trust in Almighty God and the acknowledgment that apart from Him we are powerless will lead us to ultimate victory!

Daily prayer: Father, You provided David with supernatural courage, strength, and skill to defeat the boastful bully of a giant, Goliath. That huge sword was a reminder to David of your help in a time of great need. Remind us of past victories in our own personal lives and those of others in Scripture and in modern history to give us strength and faith as we face today’s battles. Nothing in ourselves will defeat the enemies we face, but “with God all things are possible.” Amen.

Today’s Suggested Music and Supplemental Resources
“Only A Boy Named David”  Video
“Praise The Lord”  Video  The Imperials  This song, popular in the eighties, often ministered to me. It has great lyrics.
Note: Yesterday we referred to the rascally antagonist Eddie Haskell, actor Ken Osmond, on the “Leave It To Beaver” TV show. Coincidentally, several readers informed us that he actually died yesterday at 76 years of age. In reading more about the actor we learned he was typecast, due to his rascally role as Eddie Haskell, and couldn’t find work so in 1970, Osmond joined the Los Angeles Police Department (LAPD). He grew a mustache in an effort to secure anonymity from average citizens. Ten years later Osmond was struck by five bullets while in a foot chase with a suspect. He was protected from four of the bullets by his bullet-resistant vest, with the fifth bullet ricocheting off his belt buckle! 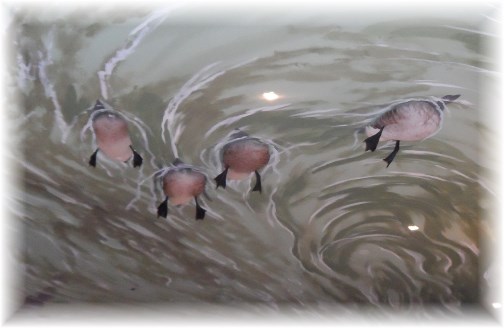 Any idea how I took this photo?